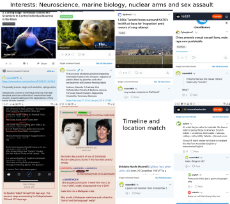 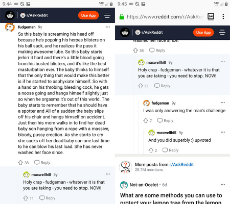 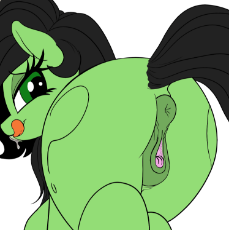 >>274912
Interesting.
An archive of that thread.
https://archive.is/4IhiI
The quick rundown is that Maxwell posts on reddit as a mod to carefully manipulate the minds of those on it.
Further investigation leads to fronts and old webpages. Reddit and various (((influencers))) do not want the Jewish connection to be known.
Ghislaine's relatives had a proto-reddit operation going on before it failed.
The gaps between posts correlate to events she was present for. Also Reddit niggers are trying to throw people off with the account being a Malaysian and not the cunt.

I can't wait to see how this develops further. 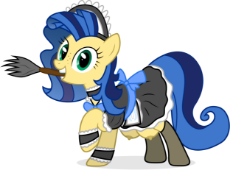 Some additional info:
>The Head of the Snake: Wexner, Maxwell’s, Mossad & Mega Group Exposed
>This is a condensed version of the three hour phone call between survivor Maria Farmer & investigative journalist Whitney Webb. I’ve included all of their discussion relating to Mossad, Mega Group, Les Wexner, and Israel. These are the key pieces of information that the mainstream media won’t touch and is in fact complicit in keeping this decades long blackmail operation continuing. Jeffery Epstein was not the head of the snake, he was only mid management and was assigned by Israeli Intelligence to work for Ghislaine Maxwell in the 80’s, who reported to billionaire Zionist Les Wexner. The operation continues without him.
https://www.youtube.com/watch?v=l6E5tOnHfKc
Anonymous
Sun, 12 Jul 2020 23:48:44 GMT
5192d1a
?
No.275630
275640 275658 276210 277680
File (hide): F61EF10E83EC9C13BCD432001B18DF59-21383.jpg (20.9 KB, 444x960, KylahIndustrialCabinet.jpg)

This seems like a decent thread for the wayfair stuff thats been going around, but perhaps it deserves its own thread.
Anonymous
Mon, 13 Jul 2020 00:34:15 GMT
cc44635
?
No.275640
275658 276210 277680
>>275630
https://www.youtube.com/watch?v=9Gyqcl0MXHE
A video from Uncle Bear Heart.
Tread carefully.
So in the comments of the video there is some interesting things being said.
>Iam NoOne
>What makes it alarming isn't just the collection of furniture named after missing children, it's when you scearch the sku numbers of these products in, it takes you to sites with children in their underwear. WTF is going on!
>PiggyMafia
>Dude, the mere fact that Wayfair calls this a “glitch,” when there is literally no way programmatically that such a “glitch” could happen is suspicious af. Also, all ecomm sites similarly “glitched” use 3rd party vendors, and the SKUs point to what appears to be a one or more Russian kiddie pron sites. I don’t know bc I don’t speak Russian. Let’s suppose you are a legit businessman who owns a legit ecomm site, and some 3rd party posted stuff like this. What do you do? Pass it off as a “glitch”? Or do you commit to take your site down for a couple of days while your IT team works with LE to get to the bottom of this? Which of these did Wayfair do? So yeah...suspicious af.
>Miss Miami
>I gave it some consideration because I was shopping their website several months ago, and their listings don't make any sense in several ways. Could be just a terrible webmaster, but the whole site and operation seems shady. Same sofa, same name for two different prices? I saw those pillows too and I thought how ridiculous. Maybe that's why Wayback Machine was under attack last week? Money laundering possible at Wayfair?
Anonymous
Mon, 13 Jul 2020 03:30:13 GMT
5117806
?
No.275658
276210 277680
File (hide): CB8BFB6FE3AB2F01A4B498D8BEDF7D0E-456739.png (446.0 KB, 836x1000, 0.png) 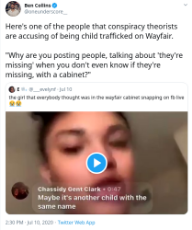 >Wayfair Company Reported to FBI for Operating Massive Online Human Trafficking Front
>What is being termed a ‘conspiracy theory’ by access media emerged on Friday, touting that the Wayfair online store was using the sale of storage cabinets, pillows, and children’s related items, as a cover for child trafficking.
>When asked for comment, a representative of Wayfair – a home decor company – immediately denounced as false.
>However, a post on the social media website Reddit and others on Instagram, noted the irreconcilably high cost of the furniture — along with the fact that each item was identified by a female name.
https://fort-russ.com/2020/07/major-wayfair-company-reported-to-fbi-for-operating-massive-online-human-trafficking-front/
https://twitter.com/BeachMilk/status/1281840972775559168 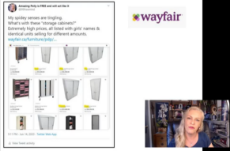 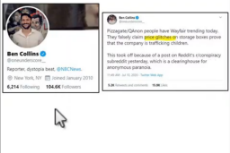