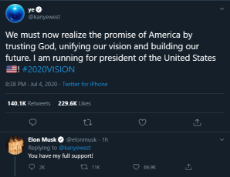 I have to say, this isn't what I expected today. But let us assume for a minute this isn't some half-assed "oh I'm running for a month", and he's actually launching a full scale campaign; what does this mean for November?


Anonymous
Sun, 05 Jul 2020 01:55:39 GMT
b71902d
?
No.274414
It could mean a spoiler effect for Democrats.
Anonymous
Sun, 05 Jul 2020 02:56:48 GMT
1dd1657
?
No.274420
274421
I doubt it's much more than a publicity stunt given that he announced it today of all days. He'll get vilified by the left wing establishment even more, which will stand as testament that the democrats only care about a particular kind of black person. I figure this is what he's after than any serious bid to win the presidency.
Anonymous
Sun, 05 Jul 2020 03:16:33 GMT
e230786
?
No.274421
>>274413
The only people on the Republican side likely to defect are the cuckservative crowd who want an Evan McMuffin or someone like that to run. A lot of the boomer magapede crowd likes Kanye because he's been friendly to Trump, but they wouldn't leave Trump to vote for him instead. So if he peels off any votes it's likely to be on the Democrat side, likely coming from the black vote which they can't afford to lose. I could also see a lot of Bernie Bros who are still pissy about being cucked on the nomination again casting a protest vote for him. Put together that could easily do enough damage to screw this up for them, especially since they're pretty much following the same playbook as 2016 and are probably on track to lose anyway.

Even Kanye West isn't detached enough from reality to think he could win the Democrat nomination so he might be better off trying to start a black third-party, which would actually be hilarious, because it would cost the Dems a crucial base that they've spent decades taking for granted. Kanye wouldn't even come close to winning, but establishing the party would finally split the Dems. 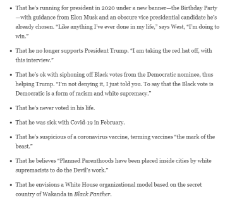 >An hour into the interview, the hedging was done: He says he definitely plans to run in 2020, versus his original plan in 2024. The campaign slogan: “YES!” His running mate? Michelle Tidball, an obscure preacher from Wyoming. And why the Birthday Party? “Because when we win, it’s everybody’s birthday.”

>That said, he won’t say much more against Trump. He’s much less shy about criticizing Biden, which certainly won’t tamp down the idea that the Birthday Party is a ruse to help re-elect Trump. “I’m not saying Trump’s in my way, he may be a part of my way. And Joe Biden? Like come on man, please. You know? Obama’s special. Trump’s special. We say Kanye West is special. America needs special people that lead. Bill Clinton? Special. Joe Biden’s not special.”

>When asked about foreign policy: “I haven’t developed it yet. I’m focused on protecting America, first, with our great military. Let’s focus on ourselves first.”

>“A lot of Africans do not like the movie [Black Panther] and representation of themselves in…Wakanda. But I’m gonna use the framework of Wakanda right now because it’s the best explanation of what our design group is going to feel like in the White House…That is a positive idea: you got Kanye West, one of the most powerful humans—I’m not saying the most because you got a lot of alien level superpowers and it’s only collectively that we can set it free. Let’s get back to Wakanda… like in the movie in Wakanda when the king went to visit that lead scientist to have the shoes wrap around her shoes. Just the amount of innovation that can happen, the amount of innovation in medicine—like big pharma—we are going to work, innovate, together. This is not going to be some Nipsey Hussle being murdered, they’re doing a documentary, we have so many soldiers that die for our freedom, our freedom of information, that there is a cure for AIDS out there, there is going to be a mix of big pharma and holistic.”

>On other priorities: “Clean up the chemicals. In our deodorant, in our toothpaste, there are chemicals that affect our ability to be of service to God.”
Anonymous
Wed, 08 Jul 2020 18:42:40 GMT
e230786
?
No.274841
274870
>>274827
>>274831
His chances of actually being elected are slim to none; he's entering the race four months from the election as a third party candidate with no campaign staff. He doesn't have any articulate messaging, nor does he have a single issue he can repeatedly push like Trump did. Assuming he goes through with this, the most he will do is peel off enough black votes to sink Biden. The long-term consequence of this is that it's going to make the Democrats look even sillier than they do already, and possibly fracture their party in the same way that Trump fractured the Republicans. I don't think Kanye has the charisma or the following to pull off a hostile takeover of the party the way Trump did, but if he can convince enough blacks that they're better off starting their own party than continuing to eat shit from the Democrats, it will completely fuck them in a pretty hilarious way.
Anonymous
Wed, 08 Jul 2020 23:12:54 GMT
31d38c2
?
No.274870
>>274841
It's cynically genius. It's hard to ridicule him because he's already ridiculous. Democrats can't complain because it would imply that blacks vote for black candidates regardless of qualifications, and that's racist. It's a good way to counter the race-baiting strategy of the last couple months.
Anonymous
Thu, 09 Jul 2020 08:14:15 GMT
98cbf0d
?
No.274922
File (hide): 5E5F75EFE07E053EC32F767953D4EF2C-57905.png (56.5 KB, 1200x892, F4B16687-DE90-493F-89CE-E78EF2D9DAC8.png) 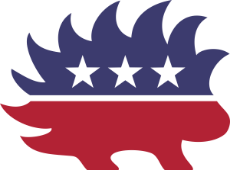