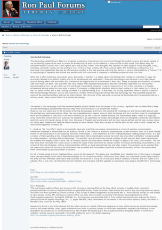 Voice to Skull technology and mind control
Anonymous
Mon, 16 Nov 2020 00:21:00 GMT
No.1194
1195
[View All] [Last 50 Posts] [Last 100 Posts]
After years and many reports about people hearing voices inside their head, a commercial spinoff is unveiled. And the company doing it, is not in America, but Israel.

>New device puts music in your head. No headphones required.
>Imagine a world where you move around in your own personal sound bubble. You listen to your favorite tunes, play loud computer games, watch a movie or get navigation directions in your car — all without disturbing those around you.
>That's the possibility presented by "sound beaming," a new futuristic audio technology from Noveto Systems, an Israeli company. On Friday it will debut a desktop device that beams sound directly to a listener without the need for headphones.
https://www.ksl.com/article/50047469/new-device-puts-music-in-your-head--no-headphones-required
https://www.youtube.com/watch?v=4zHxwUJR8dQ

Further reading:
>Ron Paul Forums (from 2008)
> Voice-to-Skull Technology
>"The technology called Voice to Skull is a projected sound/voice transmission into one's mind through the auditory nerves and bones instead of via the hearing organs of the ears. It cannot be blocked out; at least no such defense is known in the civilian world. Such takes away the inherent freedom a person has to the right of quiet and privacy in their inner thoughts. The injection of other people's words, thoughts, views, hostilities, demands, insults, etc into another's inner mind is a huge violation of a free person's rights. This technology exists just as it is described. Such capabilities that can be inflicted upon another is one step towards enslaving that person in various interpretations of "slavery." It is a psychological operation that I doubt any person could fully overcome if subjected to relentless projected voice over time.
>While this is often treated as amusing by some, the reality is that this is a highly abusive technology that violates an individual in ways not previously debated in an ethical society prior to its development and application. I know this technology exists because I have interviewed several leading IEEE's with dual PHD's and lifetimes of the highest level of achievement in their field. These are people with hundreds of patents with their names on them. One dual PHD who once headed MIT's Engineering laboratory described what the experience was to have this demonstrated on him. He got a kick out of it and found it fascinating. However, it was an experience of only a few moments in a friendly professional setting where he knew what to expect. If someone is subjected to relentless abusive input contrary to their values for 24 hours a day, for years on end, and is not a willing volunteer, it is not fascinating at all. In that case, it's a living nightmare. There is reason to believe that this technology has been used on non-volunteers. Further, there is reason to believe that this technology has long migrated beyond the realm of the classified military and into the black market. The cat is out of the bag as far as having the technology and it's operation kept as a military secret. Keep in mind that it IS a military technology.
http://www.ronpaulforums.com/showthread.php?137258-Voice-to-Skull-Technology

>Voice to Skull Technology Is Embedded in 5G-Mind Control Reaches Its Apex (from 2018)
>Recently I has approached by a self-described “insider” who had at one time worked for DARPA. He insisted that the new 5G technology being rolled out across the country was both lethal and contained mind control elements that should alarm all people. I thought the claims were outrageous and with scientific justification. Don’t misunderstand me, I know that mind control exists, however, 5G being an element of mind control surprised me. Subsequently, I began a literature search and I found the mother load.
>patents describing how it work.
>nanotechnology
https://eraoflight.com/2018/08/14/voice-to-skull-technology-is-embedded-in-5g-mind-control-reaches-its-apex/