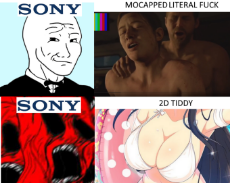 BIRCH WORLDS - THE ULTIMATE SPACE SCIENCE THING
Anonymous
Wed, 19 Aug 2020 01:03:35 GMT
No.1139
1141 1142 1144
[View All] [Last 50 Posts] [Last 200 Posts]
Today I learned about Birch Worlds for the first time.
They say that if a Black Hole is large enough, the gravity just above its event horizon will be about equal to earth's gravity.
Therefore, one can build a fucking huge artificial shell-world planet built around this black hole to exploit the earthlike gravity at the extreme planet size.
Because normally, a bigger planet means more gravity.
But black holes can piss all over that.
"They allow for normal gravity at extreme planet sizes", says the guy who told me about these.
The bigger the black hole is, the larger the shell around it can be.
"A theoretically infinite number of people could exist on a massive artificial planet built around a sufficiently large black hole, especially if a system of multiple layers of false world is built into the false planet, since there would be little meaningful difference in the gravity between one layer and another" says the birch world fans.
They say that on such a planet, the world would be so large that the world would seem flat to a normal person on the ground. Incomprehensibly large and utterly flat. A single lifetime of endless air travel in a single direction couldn't take you to where you started.
There's only one way to make this even more intense: Add a method for this colossal artificial world to generate energy from the black hole it's built around, letting it become self-sufficient.
Literally the only downside (besides standard theoretical science "bruh what's stopping the fake world from moving too much to one side and getting eaten by the black hole" stuff) is that trying to get off this world would be a bitch. Achieving escape velocity would be tricky.
Still, is that sick or what? A fucking huge theoretical artificial earthlike world that exploits a black hole to gain earthlike gravity.

I know this board is meant for doom-and-gloom science that could create a dystopia, but where else could I post this? The self-improvement board? The sports and shitposting board? The front page, despite its lack of relevance to politics or ponies?

Then again on such a world, long-distance communication between people would be a pain in the ass. FTL communication would be needed for any group to control the whole planet and that's probably never happening. The world's governors would be restricted to governing local areas. The word of a ruler and his rule would end at places his word and soldiers can't travel to in time.

Imagine if a corrupt government imprisoned dissenters, removed their brains and put them in self-sustaining cyber-jars rigged to keep the brain alive and simulate pain in the brain, and then stored these jars on an incomprehensibly large Birch World.

>>1139
Is this what you are talking about?
https://www.reddit.com/r/Stellaris/comments/fnl2mq/birch_world_population_mathematics_gigastructural/
https://gamestoday.info/pc/stellaris/birch-world-population-mathematics-gigastructural-engineering-mod/
Anonymous
Wed, 19 Aug 2020 14:04:31 GMT
No.1143
>>1142
Yeah thats where i learned about it
The stellaris mod
though personally I think a galaxy wide megaslice ringworld thing is better, since it is galaxy wide. That's probably bigger than a reallybigblack hole.
Anonymous
Thu, 20 Aug 2020 03:27:16 GMT
No.1144
1145
>>1139
This is only theoretically possible, in practicality, the mass of the structure itself would generate its own gravity and rip itself apart with the slightest of movements. You'd need a super light, super strong material to build it, and you'd need more material than a single galaxy could even provide. Say you could construct it out of pure hydrogen, the most common element in the universe, there wouldn't be enough in this entire galaxy to do it.
Anonymous
Thu, 20 Aug 2020 08:40:17 GMT
No.1145
>>1144
Fuck, you're probably right.
I bet a system of normal-ass but huge space stations orbiting around real suns would be more efficient.
[View All] [Last 50 Posts] [Last 200 Posts]
6 replies |  2 files |  4 UUIDs |  Page 5
[Go to top] [Return] [Catalog] [Reload] [Archive] [Update] ( Auto)