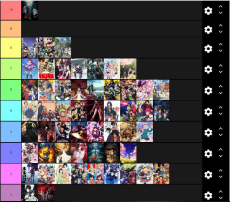 [I will but some of my opinions of the show here]

10 Death Note [Have still never seen anything like it in terms of mindgames in anime. Don't know if there are things outside of anime that are similar. Thick with mindgames that lead into one another. The biggest con for me is that moral dilemma doesn't really make sense.]

8 Steins Gate[Seem to be consitent with its rules, filled with subtle storytelling details, and the mechanics of the time travel is blend of many differnt ideas strung togather beautifully. Don't remeber my hangups bt thhey were few. I think it is more that even though it is well made it throughout I think there are two reasons for it not being a ten. The first reason is that I might subjectively like something more and the second reason is that I simply thought that the brillaint moment in Death Note were far more brillant then the ones in Steins Gate.], One Punch Man[Great action Comedy that does not hold skimpout on either action or comedy. It is subverting and poking fun of super hero tropes and shoenen series tropes. Isn't a ten because of the same reason Steinsgate isn't one], and Log Horizon[Nice abuse of typical game mechanics by the main character. Can't really remember what more I thought about it right now.]

7 Bakemonogatari[Intresting subversions of typical tropes in anime. Can be a bit tiresome with its pretentious overabundance of flashing text and imagery. Like I think these text sinppets hold so much importance that I will pause the video so I can comprehened this deeo materpiece.], Kill La Kill[Cool action directing and use of animation. However, the story is inconsitent with a lot of things. It also doesn't help the series that I dislikes it type of "storytelling". They use a bunch of symbolisms and refrences. The latter is an overrated type of storytelling. Have you ever played Neptune. The former is not a story and is so surface level if you think about it. Yes, I get it. Threads and scissors; nakedness and clothing; Ragyo, the incarnation of hierarchy and Nui, is the inarnation of absolue anarchy since she even defies logic; these things are contrasting one another and the message is that the truth which Ryuko is an incarnation of is in the middle between these things. The problems is that this is not an compelling argument for being inbetween these other ideals. You actually have to have the story tie into the topics you want to refer to not just vaguely refrence them.], Kagyua-sama[I will comment on the rest of these later.]: Love Is War, Haven't you heard I'm Sakamoto, Tokyo Choul, Madoka Magica, and Hyouka

6 Neon Genesis Evangalion, Bakuman, Mob Psycho 100, (Okay, you might have apoint here. I can't tell which fate is which I thought this was Fate Zero and the one blow was Fate stay night) Fate Zero, Noragami, My Hero Academia, High school of the Dead, No Game No Life, Code geass, and Konsuba

4 Seraph of the end, Another, Bleach, Fate stay night (should it be here), Re:Zero, Samurai Champloo, Attack on Titan, and Eromanga Sensei

3 Highschool DxD, Accel World, Your Lie in April, Elfen Lied, Guilty Crown, Ereased, Huh, this one is not what i though it was ignore

2 Mirai Nikki/Future Diaries, Monster Monsume, Nichico or whatever the one iwht the locket and key pinkie promise, Blue exorcist, Fairy Tail, Yuri On Ice, Boruto, and One Piece.