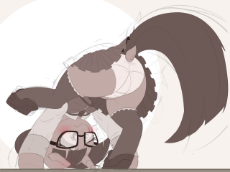 I watched all of Evangelion that they had on Netflix, really liked it, and wanted to watch the rebuild. I was sort of pissed off at most of the copies of the rebuild on streaming sites being kind of shit or being dubbed, so I decided to just go for the source.
Anonymous
Wed, 07 Aug 2019 08:54:36 GMT
No.960
965
>>959
Welll, I actually watched EVA on Netflix recently myself. Long story short I watched it on my friend's netflix. I had mixed feelings. I like the desgin of the robots and beackground. The level of detail in the artwork is nice.
And the characters are fleshed out well enough for my taste.
However, my problem lies withine the setting and it effects the characters. I will have to gather my points if I am to explain my stands proper but I think that the setting doesn make sense.
Anonymous
Thu, 08 Aug 2019 07:38:15 GMT
No.965
>>960
I can understand that, the sad truth is that the science fiction of today is more fiction than science.
Though I do feel that Ritsuko and her assistant (can't remember her name for the life of me) do a pretty good job of approaching things like an actual scientist would, so props to them for that.
Watched 3.33 rework last night, if you have problems with Evangelion's setting not making a lot of sense then you're really not going to like 3.0/3.33.
Also it's fan-pandering shit tbh.
Anonymous
Fri, 22 Nov 2019 19:29:14 GMT
No.1102
1106 1111
File (hide): B597AFF2D5161C6D0B8C71B44ADC0F92-918230.png (896.7 KB, 900x1200, Kemonoto_Sakura.png)
[Bing] [wait] [Tineye] [Yandex] 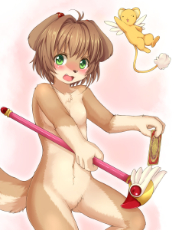 >>958
>manga
This. Only problem is that you'll have to rely on scanlations unless you learn Japanese, and often times good shit doesn't get scanlated because it's just not popular enough.
>>949
Try Boku no Pico. :^) There is way worse shit than BnP, which is only a meme because it's shocking "enough" to normals and because normalscum feel about something a certain way because they know in the back of their mind that it's popular to feel that certain way about something, and they're too stupid/unaware to examine those dark recesses. I suppose the original idea is that fags who would ask for anime recommendations would not have watched enough and would not be familiar with material that would be unthinkable in the States, like shotakon hentai.
In any case, why do you want to watch anime? If I were you starting out, I'd watch/read early stuff then work my way up to the present. That way, you won't miss references to other anime, and you'll see the industry grow, and you'll see it decline.
>artist
I really wish he'd actually do more explicit stuff and do some non-giantess stuff.
Also I apologize in advance if the meido here feels this image isn't appropriate. I thought it was because she's "naked" in the same way children's teddy bears are, that is, you don't see any private bits.
Anonymous
Thu, 28 Nov 2019 01:34:36 GMT
No.1106
1107 1110 1120
>>1102
I really do want to watch anime for the plot, memes aside. If something is poorly-animated but has a killer story, I'll eat it up. I know it gets a bad rap because of all of the bad shit that gets made, but I simply see it as another way to experience a story.
Anonymous
Fri, 29 Nov 2019 10:24:24 GMT
No.1107
1108
File (hide): 97C93251FBF32E1A8D05295BC63809D3-500137.jpg (488.4 KB, 1600x2400, anime_reocmmendations.jpg)
[Bing] [wait] [Tineye] [Yandex] 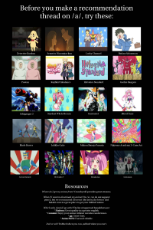 >>1106
>"but I simply see it as another way to experience a story."
Well, in that case I would look through MaL or AniDB or something to find something you like, something that sounds interesting. Unless you want to learn about the genre like some genuine /a/utist, but you said you merely wanted good stories speaking of which, what exactly do you mean by "/lit/ fag"? I mean, what sort of literature do you read?. Anyway, I would just start on earlier stuff and then work your way up, choosing what seems interesting, simply because some stuff that gets popular now is too similar to past works. Try to torrent, simply because streaming tends to leave ugly watermarks, but more importantly you can't control what subs you're using and the quality.
Anonymous
Fri, 29 Nov 2019 10:50:55 GMT
No.1108
File (hide): 3BC9746DC42789926790B263A60EEBBC-5433622.webm (5.2 MB, Resolution:3840x2160 Length:00:04:01, pur.webm) [play once] [loop]
[Bing] [wait] [Tineye] [Yandex] 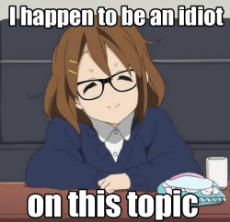 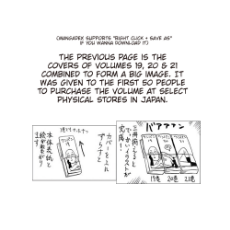 >Cowboy Bebop
This is quite possibly the best thing Japan has ever made. If you've never seen it, you need to watch it immediately.

>FLCL
This one is only six episodes long, and you will probably not like it the first time you watch it, particularly if you don't watch a lot of anime. It's very bizarre and parts of the story are borderline nonsensical. However, I recommend watching through it at least twice, because once you get past the weirdness it's actually a really well-told story about early adolescence. Along with Cowboy Bebop, it also has probably one of the best soundtracks of any anime.

>Record of Lodoss War
This is a now mostly forgotten gem from the 90s that is nonetheless worth watching. It's basically just an animated version of someone's Dungeons and Dragons game, but its fun. There is also a second series called Chronicles of the Heroic Knight, which basically tells the same story with different characters, and even more confusingly overlaps with actual events from the first story. But both are good.

>Fractale
This one is actually somewhat redpilled in that it explores a world in which UBI exists, and shows the kind of atomized, purposeless, friendless lives that humans would most probably live in a world where all their basic needs are provided by government and people mostly communicate through virtual reality. A covert group of survivalists rebells and forms a self-sufficient community that refuses all gibs from the AI government. If I remember correctly it gets pretty bizarre towards the end.

>Kaze No Yojimbo
I've never met another person who has even heard of this series, but it's great if you are able to find it somewhere. It's a contemporary story based on the plot of the Akira Kurosawa film Yojimbo.

>Bamboo Blade
Fun story about a high-school girls' kendo club and the lives of its members. A fairly lighthearted story that is nonetheless quite good. I remember enjoying it a lot.

>Charlotte
Fair warning: this one will induce heavy feels. It was written by some of the people from Key, who make visual novels. If you're familiar with the types of stories they write, you should have a rough idea of the kinds of feels you're in for. Highly recommend, though.

>Barakamon
Renowned calligraphy artist gets angry and punches a critic in the face over a bad review, and his agent sends him to cool out in a remote village in the country. While there, he develops a relationship with some locals and rediscovers his purpose in both art and life. This is probably the most /lit/-tier anime on this list.

>Magical Shopping Arcade Abenobashi
Another good story about growing up and coming to terms with things. Has a lot of random silliness to it, but there's a deeper story underneath if you stick with it.

>Revolutionary Girl Utena
This one is good if you like mindfuck stories. The movie is especially weird. If you've ever seen Madoka Magica, I felt that it borrowed a lot from Utena. Basically a dark magical girl story. There's some covert lesbian stuff in there that you can probably ignore.

>Higurashi When They Cry
I'm almost hesitant to include this one on a list of anime recommendations, because the anime itself is not that good. However, it's based on a series of visual novels that are absolutely top-notch. I highly recommend playing the visual novels first; however, as they can be a bit of a time investment, the manga does a pretty decent job of adapting the story and will do in a pinch. However I don't recommend starting with the anime as it abridges quite a bit of the story and leaves out some important details.

>Elfen Lied
Fair warning: this one will also induce heavy feels. It is also pretty fucked-up and gory if that bothers you. Actually, both warnings apply to Higurashi as well.

>Gankutsuou
The Count of Monte Cristo adapted into a sci-fi anime. It has a very unusual visual style that a lot of people don't care for, but if you can get past that it's a good series.

>Chrono Crusade
I haven't seen this one in a long time so it may not be as good as I remember it, but I do remember liking it a lot. Story about a nun and a reformed demon who go around fighting devils and satanism.

>Night Walker
Another old, mostly forgotten gem from the 90s. Kind of a cornball and cliche story about a vampire who feels remorse for taking human life, but it's good.

>Gunslinger Girl
Little girls that have endured excessive trauma and abuse are taken into custody by the Italian government, have their memories wiped and are transformed into bionic super-soldiers who perform contract kills. An incredibly fucked up and bizarre premise that nonetheless makes a pretty good story. There are a few spinoffs of varying quality.

>Excel Saga
This one really doesn't deserve to be on this list, I just like it. The story is complete nonsense but it's funny as fuck. Fair warning: the humor is somewhat degenerate at points.