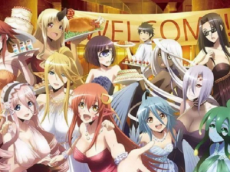 Monster Musume
Anonymous
Fri, 31 Jul 2020 01:47:08 GMT
No.1212
[Last 50 Posts] [Last 100 Posts] [Last 200 Posts]
It's not just hilarious and pretty hot sometimes, it's also redpilled!
Government intervention and "anti-racism" do more harm than good in this series.
Like the "no fucking your monster-girl homestay" law that gets in the way of the show's loving relationships fucking
and the "Monster and human can't legally hurt each other" law that means a gang of human rapists can grope a centaur girl all they want, she'll be in trouble if she kicks them away and runs away, and a human will be needed to save her.
It also acknowledges the fact that there are fundamental differences between races that means they should get and require different treatments.
Sometimes dumb fucking Orcs will break into a manga shop and take hostages, and it will be necessary to put them down like mad dogs. And if the govt says humans and monsters can't harm each other and only monster can harm monster, that means a squad of monsters allowed to kill led by a human will be needed to do the deed.
If you're going to have a Mermaid with you, she will need a swimming pool to live in. A mermaid girl will never be a professional sprinter.
Sometimes a Slime Girl is going to feed on a woman's fluids and if that feels like molestation to you, that's on you.
The thing that makes the government worker character, Agent Smith, a good guy? She usually knows when to turn her head and look the other way, like she did when Suu was introduced and she said "fuck it i'm too busy to admit i just discovered a new monster species, if anyone asks she doesn't legally exist"
It's not extremely redpilled, and I find myself wondering where all this cash to make swimming pools and house expansions comes from (monster lands, hopefully) but it's still a nice change of pace.