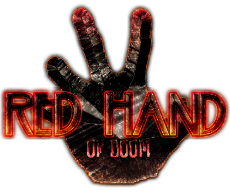 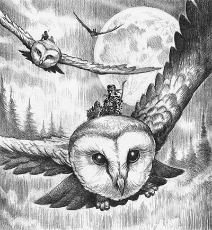 Red Hand Of Doom - Part II: The Electric Boogaloo
Anonymous
Sat, 19 Dec 2020 14:53:26 GMT
03b4536
?
No.139426
[View All] [Last 50 Posts] [Last 200 Posts]
Welcome, lurkers, to our fabulous thread.
In this thread, we continue our journey in which our party (yet unnamed), embarks on an epic quest to thwart the assault of the Red Hand army on Elsir Vale, racing to prepare for the assault before the might horde ends the world as they know it.

The game is a long-term d&d campaign that run on the 3.5e system. It is mostly played on this board, with partial support on discord.
General details of the campaign can be found here: >>132102 →

Now, the party left off at the end of the evacuation of Drellin's Ferry, the townsfolk fleeing ahead of the advance of the horde. The Red Hand forces are mighty, and the party has been able to accomplish little to hinder the army, although the vengeful fury of a certain giant and his granddaughters may have bought the villagers some time, as distant sounds of thunder echo from the hills.

In part one, the party learned some vital information, from the the Wyrmlord Koth's notes, map, and conversations with many characters along the way
>The Red Hand horde means business. If it is going to be stopped, that will have to be at Brindol, the only place in Elsir Vale with a standing army large enough and the fortifications necessary to have a chance against such a large force.
>Monsters are blocking the roads to the north, blocking any chance of reinforcements for Brindol
>One of the leaders of the Red Hand is in the ruined city of Rhest.
>The horde is going to steamroll the towns east of Drellin’s Ferry and keep going.
>A powerful wizard named Cromar is retired in the Blackfens
A partial archive of Part I can be found here: >>133942 →

And with that, let the games begin. 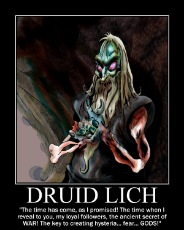 >>140920
[Sighs]
I really shouldn't be telling you this before part 2 even begins, but I already spoiled in in that ghost-nonsense encounter, so...

Okay, as I mentioned earlier in the server, I've taken the liberty to do a bit of retconning to the session two weeks ago. It was my mistake to replace a lvl 4 low-op Fighter with a lvl 4 high-op Warblade with a x4 crit modifier.
>muf favored weapon of Tiamat
Because of that I derailed the game and created the "revive Henry" sidequest that forces the party to go to Brindol.

So, with that being said.
>A magical golden elephant (see: Hollyphant) flies by and revives Henry immediately after he dies
>Henry remains lvl 6 because reasons
>Dumbo is immediately torn apart by randomly-spawning demons
>the demons are promptly smited by a randomly-teleporting Paladin on a Door Crusade casting Door To Great Evil:
>http://dnd.arkalseif.info/spells/ghostwalk--94/door-to-great-evil--1384/index.html#:~:text=Door%20to%20great%20evil%20guarantees,with%20a%20way%20to%20return
>Sir Not-Appearing-In-This-Film promptly teleports away on his prismatic dyke horse, to do important paladin stuff elsewhere
>An Ethereal Filcher pops in from the Astral Plane and steals the +1 Dragonfang Heavy pick and the priceless blue diamond from Jorr's Bag
>"REEEEEEEE! Dagnabbit! Bloody, plowin' Filchers!"
>A random Hobgoblin Bladebearer charges out of the woods and attacks the party
>She is immediately shot to death by Jorr, who got a sneak attack, and finished off by his dogs
>She Drops two identical +1 Dragoncraft clawed gauntlets (spiked gauntlets, but slashing), and two more potions of Enlarge Person (the party has 3 now).
>An Invisible, flying Wizard helpfully tells Aral that the Ice arrows he found were actually made of Stygian Ice
>John J. Abrams, said Wizard, accidentally steps on a planar manifest zone, and enjoys an all expense paid vacation to the 5th layer of Baator, only to return when his player is able to commit to playing consistently

I know it's gay, but this will make it more enjoyable for everyone.

And so, the party leaves off on day 12, having just finished interrogating the Piss Goblin. It is no longer necessary to go to Brindol to revive Henry, but you may if you wish to.
You could also see what Norro Wiston said about Cromar being in danger in the Blackfens.
Or check out the blockades on the Rhest Trail that the lion lady mentioned, in that area.
Or see what this "Saarvith" guy is planning in the Blackfens to unleash on the elves there.

I turned time back to day 12 because stuff happens in-game regardless of whether or not the PCs move to the next milestone. Also because I don't think anybody absorbed that you could get to both the blackfens and the Rhest Trail via the Elsir River.

After you get to the next milestone (It's in the Blackfens), I will raise the entire party to lvl 7, and switch the game back to XP based leveling.

So, you can either go by boat, or head up the Rhest Trail North of Talar. At this point, I'm situating you guys around Talar, so it'd be quicker on horseback. 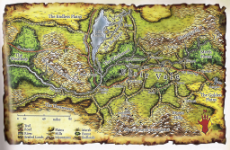 This info is revealed with Aral's Geography check, inferring from his own memory of the Blackfens, and the Red Hand map.

You rested in Talar on day 13, and went north to Witchcross after suddenly deciding there was nothing worth doing in Brindol for now.

One merchant is selling a Gray Bag Of Tricks for 800 gp. Less than usual.
And it seems as though a set of Druid's Vestments are going for 3,750 gp. Just over a third of its usual price.

Magic Arrows are sold individually for the price of 50 of said arrows divided by 50.

Really, if you guys want a low-cost magic item, I'll let you buy it. Nothing over 4000 gp is here though.

Reminder that gems, treasure and art items sell for their full price. They're basically currency.

Fyi, if you don't intend to buy something with the funds, the gems and art items are worth carrying around because they're effectively lighter weight currency. You should be factoring the weight of gold and silver into your carrying capacity.
>50 pieces = 1 pound of metal
Art items also count as masterwork tools for whatever skill you can justify them relating to. 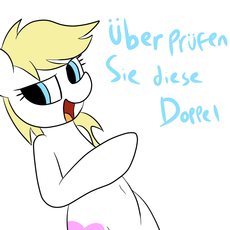 As the evening of day 15 closes in, I'm giving Aral's player a chance to scout ahead.
>Up ahead, a crude, 10 ft high palisade of logs has been been erected across the road, extending forty feet to either side and completely blocking all passage. A squat, 20 ft watchtower looms in the middle of the palisade. You catch a glimpse of movement up in the tower, and spy a hobgoblin archer leaning against a post with his chin on his chest.
So yes. There is indeed a blockade on Rhest Trail, just before the Blackfens.
Anonymous
Sat, 16 Jan 2021 20:50:00 GMT
03b4536
?
No.141529
>dicerolls
Aral hears the sounds of hobgoblins boasting about battle, and boredom of being left out of the killing down south.
He also hears the sounds of what you can only assume to be a couple large (not huge) giants snoring.
197 replies and 12 files omitted.
[View All] [Last 50 Posts] [Last 200 Posts]