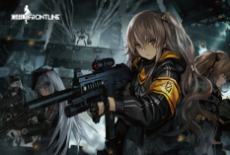 As far as games in the "collect cute girls" genre go, it's okay. Probably even one of the better ones, since combat has a strategic map where you move units around a map and capture sectors, and can see the enemy units and defend against them and such. In-combat you can also reposition your units to take heat off of wounded ones and such. There's also some minor strategy to squad building, since each unit gives a bonus to certain types of other units, but only in certain tiles, so you'll be able to ponder things like leaving a weak unit exposed to get the extra bonus to other units and things like that.
Note that those are all pretty shallow in practice, they're just more than the "press 'fight' and watch the pretty colors that you have no control over" that I've seen from most other "collect cute girls" games.

The art is reasonable, and there's a wide variety of girls/guns, so it's easy to find something to suit your particular predilictions.

The crafting is somewhat interesting. You spend the generic resources to craft all units, so you can get a pretty reasonable amount of units from grinding maps and stuff for resources, in addition to the units you get from grinding the maps themselves.
Of course, later in the game you can use more resources to have a chance at crafting different and more rare units, but it's still just the standard resources you get in game, and not gems or anything.

The story is the same incredibly generic "oh no, the really cool looking evil units are attacking, and you, the brand new on the job but somehow really tallented recruit, have to save us, and no you can't join the awesome looking side, they're evil." that's in most of the rest of the games like it.
Rumor has it that they're going to be adding the ability to capture the enemy units at some point, but that's just a rumor for now, and you still won't be able to side with them, just have them on your team.

In rough summary, if you've ever thought something like "why are mobiles games all so crappy, I'm wasting my time", then I'd say skip it and just browse fanart and such of it. It's better than most games in the genre that I've seen, but it's still just a mobile collection game, and thus has barely any substance. 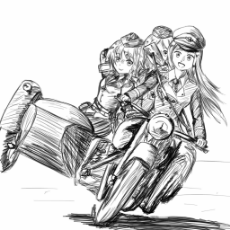 I should check out this subforum more often. I'd describe the gameplay as kind of similar to advance wars. The first few levels are kind of plain and straightforward, and it's a bit of a pain grinding girls to level 90+,but the events have progressively been kicking it up a notch. We're currently about two thirds of the way through the "Arctic warfare" event, that has introduced some new gameplay mechanics like one-way paths, one-time use supply caches, temporarily accessible resupply points, and the Jupiter cannon enemy unit.

The story is supposed to start taking off once we start catching up to the Chinese servers,and apparently the lore was heavily inspired by metal gear and command and conquer.

It seems like at some point in the setting's past, alien ruins were discovered somewhere (I forget where since I've only paid cursory attention to the story bits beyond what's available on the English server). Bad shit happened, there was an explosion, and something called "collapse fluid" was released into the atmosphere. Collapse fluid basically corrupts people who come into contact with it into horrible nightmare fuel monsters. The majority of world's population was wiped out after the collapse fluid made its way into the jet stream. Humanity's survivors live in secured enclaves. The "doll" technology used to create these Android girls was developed to create workers that could safely help reclaim territory without risking human lives to exposure to residual collapse fluid.

You play the game in the role of a new commander in the military contractor group "Griffin Kryuger" and are tasked with keeping some territory on the fringes of one of the living zones safe. G&K is kind of a budget security firm since they basically just reprogram civilian model dolls to make use of assorted firearms as a cost savings measure. Government military forces have dedicated military hardware designed from the ground up for combat. The opening chapters have you facing off against Sangvis Ferri, a doll manufacturer where apparently the AI over there went all Skynet and murdered every human employee. However despite basically being the budget mall cops, G&K are pretty much the only ones dealing with Sangvis Ferri because the local government military has bigger problems demanding their attention. Namely keeping the roving hordes of Gigga Niggas and nightmare fuel at bay.

I haven't really paid much attention to what's supposed to happen next, but I think that your scuffle with Sangvis Ferri ends up threatening to expose something that the deep state would rather be kept hidden, so G+K ends up being declared an enemy of the state, and the military is brought down on the heads of both Sangvis and G+K. Resulting in the exile or imprisonment of all of G+K's command staff.

>>84244
>Note that those are all pretty shallow in practice, they're just more than the "press 'fight' and watch the pretty colors that you have no control over" that I've seen from most other "collect cute girls" games
The current content on the English server is pretty easy and can be afked with sufficiently leveled teams, but I've seen enough from the Chinese server to know that this press go and just watch your girls fight won't continue to fly. The content just keeps getting harder from here on out.
[Last 50 Posts] [Last 100 Posts] [Last 200 Posts]
4 replies |  5 files |  4 UUIDs |  Page 18
[Go to top] [Return] [Catalog] [Reload] [Archive] [Update] ( Auto)