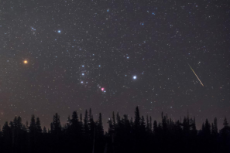 Waiting for Betelgeuse to go Supernova
Anonymous
Tue, 31 Dec 2019 23:53:13 GMT
No.1049
1053
[Last 50 Posts] [Last 100 Posts] [Last 200 Posts]
>A giant star is acting strange, and astronomers are buzzing
>The red giant Betelgeuse is the dimmest seen in years, prompting some speculation that the star is about to explode. Here's what we know.

>The constellation Orion is one of the most recognizable patterns in the night sky, visible around the world. But if you’ve looked at Orion recently and thought something seemed off, you’re not wrong: The giant red star Betelgeuse, which marks the hunter’s right shoulder, is the dimmest it’s been in almost a century.
>Normally, Betelgeuse is among the 10 brightest stars in the sky. However, the red giant began dimming in October, and by mid-December, the star had faded so much it wasn’t even in the top 20, Villanova University’s Edward Guinan reported in an Astronomer’s Telegram.

>To be clear, dimming alone isn’t all that odd for a star like Betelgeuse. It’s what’s known as a variable star, and its shifts in brightness have been closely studied for decades. However, it is unusual for one of the sky’s most prominent points of light to fade so noticeably, prompting scientists to consider the possibility that something more exciting could be about to happen: Betelgeuse might explode and die, briefly blazing brighter than the full moon before vanishing from our night sky forever.
>Huge, red stars like Betelgeuse live fast and die violently, exploding in stellar events called supernovae that are visible across vast distances. So, while Betelgeuse is a relatively young star—only about 8.5 million years old—astronomers know that it is nearing the end of its life.
>“The biggest question now is when it will explode in a supernova,” UC Berkeley’s Sarafina Nance, who studies Betelgeuse and stellar explosions, said on Twitter. “Disclaimer: I don't think it's going to explode any time soon,” she added during an interview with National Geographic. “But I am excited [for] when it does.”

>Recent studies suggest that the star will most likely explode within the next million years, and perhaps as soon as 100,000 years from now. Or … maybe Betelgeuse has already exploded and we have not yet seen it happen.
>It takes light from this star about 600 years to reach us, meaning that we’re actually observing the star as it was 600 years ago. If we do see it detonate in our sky any time soon, that means the star actually blew up sometime during the European Middle Ages, and light from the blast is just reaching Earth.
>Either way, scientists are excited to keep watch on Betelgeuse and see what sorts of surprises the star still has in store.
>“It's actually quite rare to study a star this well pre-explosion, whenever that happens,” Nance says. “This will inevitably yield cool and interesting ideas for what happens to stars right before they explode.”

>>1049
>prompting scientists to consider the possibility that something more exciting could be about to happen
>astronomy
A science mostly based in observation, theories, speculation, and some degree of imagination.
[Last 50 Posts] [Last 100 Posts] [Last 200 Posts]
2 replies |  2 files |  3 UUIDs |  Page 5
[Go to top] [Return] [Catalog] [Reload] [Archive] [Update] ( Auto)