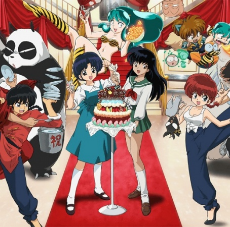 Rumiko Takahashi
Anonymous
Sat, 26 May 2018 21:19:55 GMT
No.133
162
[Last 50 Posts] [Last 100 Posts] [Last 200 Posts]
Anyone else a fan of Rumiko Takahashi? Back in the early 2000s when Inuyasha was rabidly popular there was a lot of discussion of her, but you don't really hear as much about her these days. I get the impression a lot of younger fans aren't as familiar with her. She's known for doing extremely long-running stories that usually focus on romance and comedy, with the exception of Inuyasha and Mermaid Saga, which are somewhat darker works. In Japan she is regarded as one of the most significant manga authors in history.

Currently running one is Rin-ne, which I am ridiculously far behind on. 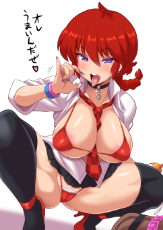 I watched Ranma and Inuyasha at the time they were on TV in the west.

The first wasnt bad, but in retrospect I disagree with the general Tranny theme. I liked Inuyasha for a while, but i quickly realised that this show was kind of going nowhere and every episode was kind of the same. Also most of the male characters gave of gay vibes to me.

Maybe its just a personal dissconance with japanese culture or the fact that the creator of these shows was a woman, but i dont think they aged well.
Anonymous
Sun, 27 May 2018 18:43:13 GMT
No.161
163
>>157
I never really felt like the show was meant to be pro-tranny or even had anything to do with actual trannies. The premise is basically just "guy gets cursed and now turns into a woman every time he's splashed with water, comic mishaps ensue." He doesn't want to be a woman, he's not sexually attracted to men, and he spends most of the series trying to figure out a way to break the curse. It's just a comic device, I think you only see it as pro-tranny because of the way trannies are viewed in the US. Japan probably has some kind of stigma associated with actual trannies and fags but I don't think it's quite the same as it is here. I notice in some animes there are cross-dressing characters, but it's usually used for humor, like the male character will hit on the trap thinking it's a woman, then find out it's actually a man and be like "eew gross".

Also I don't really catch a gay vibe off Inuyasha, I think it's mostly just that a lot of anime characters tend to look the same, and male characters can sometimes be drawn as slightly effeminate looking, especially when being drawn by a woman. By that standard I think Clamp's male characters are much gayer looking.
Anonymous
Sun, 27 May 2018 18:59:15 GMT
No.162
167
>>133
I enjoyed Inuyasha I seen bits of it as a kid on Toonanmi and then watched it with my ex fiance. Tbh I have never finished it since the anime is just too damn long I got a few seasons in then stopped. I did love the Youkai stuff and the ancient japanese stuff it was just really fun to watch and the characters funny and likeable.
Anonymous
Sun, 27 May 2018 19:23:08 GMT
No.163
>>161
I think the word you are looking for is hermaphrodite
Anonymous
Sun, 27 May 2018 22:27:27 GMT
No.167
>>162
If you ever want to finish it, the last arc of the third season and the entire fourth season is filler so you could probably skip those episodes. The third season filler arc with the cat demons is decent but most of S4 is just shitty one shot episodes. Also the original series ends abruptly but they made a second series that is basically the last half of the manga condensed into a single 26 episode season where the pacing is much faster. All in all it's pretty decent, I'd seen other anime before I watched it but IY was the one that got me into anime as a hobby.
[Last 50 Posts] [Last 100 Posts] [Last 200 Posts]
7 replies |  2 files |  5 UUIDs |  Page 7
[Go to top] [Return] [Catalog] [Reload] [Archive] [Update] ( Auto)