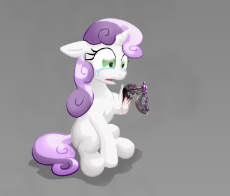 Ghost Sightings
Anonymous
Mon, 29 Jan 2018 13:02:38 GMT
q4N2x
?
No.50540
52022
[View All] [Last 50 Posts] [Last 100 Posts]
I may have seen a ghost about fourteen hours ago. I had just woken up from a very strange dream: I was at a house in Florida or another foggy, tropical place with an elderly couple. They had lots of plants and pets but what surprised me most was that they had a fully-functional, intelligent robotic Sweetie Belle who could even cast "spells" through computer programs. Anyway, I had woken up from this strange but somewhat pleasant dream when I saw a spectral being hovering over the foot of my bed. Its head was bowed down and its hands were clasped as if in prayer. Its arms and hands were very pale and extremely bony–almost skeletal–and it had a black cloak so that I could see no face nor head nor body; this tapered to a swirling tip, as if it were flying through the air. Upon later consideration I realized that it was tiny; it couldn’t have been any longer than a foot and a half from fingers to swirling cape. I had been utterly surprised and terrified at the discovery; I tried to speak but I was practically paralyzed. I looked up towards my cross and tried to pray the Our Father out loud, but although my mouth was moving no sound would come forth. After trying at this for several seconds and blinking several times I looked back down and the apparition was gone and I soon regained my speech.

I am conflicted as to whether this was real or a figment of my imagination. I am a bit skeptical, if only for its cartoony–almost Ghostbusters-like–appearance. It was certainly too definite to be a trick of the wavering early-morning shadows upon the eyes; I could see it distinctly in front of my tv and it was there for several seconds. However, I may have hallucinated the whole thing, given my over-active imagination and the fact I had a bit lot of brandy the previous night. I also noticed little or no transition between my dream and my early-morning visitor, so it’s likely that my brain had forgotten to switch off REM mode and interpreted the early-morning shadows as a ghost. Sleep paralysis could operate on the same principle, although that has not happened to me for years.

It is not possible to say that no spirit was involved here but when we sleep we are paralysed so we don't act out our dreams and also we see visions. Because you experienced both these things you might have become conscious and open-eyed whilst still partially "asleep".