WotC Sued for 10 Million Dollars
Anonymous
Wed, 21 Oct 2020 23:10:41 GMT
4791133
?
No.136605
[Last 50 Posts] [Last 100 Posts] [Last 200 Posts]
In the latest example of 'Get woke, go broke', Wizards of the Coast has decided to NOT abide by their contract with Dragonslance series creators Margaret Weis and Tracy Hickman, as well as (allegedly) poisoning the well wrt the two's relation with Penguin Publishing.
In response, Weis and Hickman are suing for 10 million dollars.
All wizards had to do was publish the goddamn books, but noooooo, they decided they wanted to take Dragonslance in a different direction, just without involving Weis and Hickman who own the rights to it.
https://www.cbr.com/wizards-of-the-coast-dragonlance-lawsuit/
>Margaret Weis and Tracy Hickman, co-authors and creators of the world of Dragonlance, have filed suit against Wizards of the Coast for unlawfully terminating their contract for a trilogy of novels to be published by Penguin Random House.

>The complaint, filed in Seattle, WA on Oct. 16, recounts the process the authors went through beginning in 2017, during which time they met with WotC representatives and ultimately signed a publishing deal for a new trilogy of novels that were to be the duo's "capstone to their life's work." By November 2019, the filing claims, Weis and Hickman had a deal in place with Penguin Random House and a complete manuscript of "Book 1," which bears the provisional title Dragons of Deceit.

>However, by August 2020, during a meeting with WotC's "highest-level executives," the authors were told that no further drafts "or any subsequent works in the trilogy" would be approved. Further, the authors claim, "The termination was wholly arbitrary and without contractual basis," and Wizards acted "in stunning and brazen bad faith."

>The authors tie the termination of their contract to events around the same time when the company was suffering from poor public relations. Over the summer, stories emerged that alleged issues in the WotC's hiring practices and other "forms of cultural insensitivity." In order to defend themselves from further criticism, the authors allege, Wizards and its parent company Hasbro killed the Dragonlance deal. 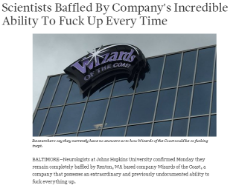 >make multi-million dollar deal with accomplished authors
>torpedo their deal with another company
>have them spend years working on books
>suddenly get SJW blowback about Orcs for books that (You) published
>be afraid of SJW blowback from new books
>Pressure accomplished writers to insert wokeness into their books
>Eventually terminate multimillion dollar deal out of fear of SJWs
Fucking hell. WotC is so full of shit. It's bad enough that they're so woefully stingy with their book licenses, and now they're fucking over good authors out of fear of twitterfags who don't even care about the games.
I hope they go broke from this and have to sell the franchise.
Anonymous
Thu, 22 Oct 2020 17:02:24 GMT
1739115
?
No.136653
136663 136668
>>136652
Weis and Hickman made the Dragonslance campaign setting, as well as the arguably most popular dnd novel series of all time, the chronicles series, which introduced entire generations to dnd and dragonslance.
Tsr would never have done this, Wizards just smeared shit on one of their largest and most successful intellectual properties and its creators.
The problem honestly, is Critical Role. Dont get me wrong, I like the series', but Matt Mercer and crew are abysmally woke politically, and Mercrr himself participated in the push to "de-nigger" the orcs. The whole folk at Wizards are hoping to shift focisaway from 'problematic' properties and be increasingly progressive with their new cash cow.
Wanna know how I know? Cuz they fucked with the penguin random house deal. Wizards didnt just break the contract, they torpedoed it
Anonymous
Thu, 22 Oct 2020 21:11:28 GMT
1d2abf2
?
No.136663
136664 136665
>>136653
I did notice that Wildemount Orcs lacked the Intelligence penalty before they removed it in the Volo's Guide errata.
I'm so sick of this "Orcs are black people" nonsense. It makes zero sense, because Orcs are literally not human. You don't hear anyone complain about Goblins, Troglodytes, and Gnolls. The fact that WotC is editing content in response to the twitter mob just shows how incompetent they are.
Anonymous
Thu, 22 Oct 2020 21:30:58 GMT
1739115
?
No.136664
136667
>>136663
But anon, niggers are literally not human
Anonymous
Thu, 22 Oct 2020 21:37:04 GMT
a3c5674
?
No.136665
136667
>>136663
Didn't it start when some WOTC book said "Half-Orcs struggle to fit in civilized society, can barely learn to read and write, and must always resist the temptation to act orcish and give in to their barbaric nature"
and this made some pozzed cuck on twitter screencap it and go "wow yikes how anti-black"
because instinctively he knows niggers are stupid
honestly I'm surprised nobody cried "racist!" at Goblin Slayer
maybe they were too shocked at the rape scene and how it made sure to realistically look at two common cliches:
guy with overly-big sword flailing wildly (he knocks the sword out of his own hand and fucking dies)
and woman who thinks her "martial arts skills" matter against a foe bigger than her
Anonymous
Thu, 22 Oct 2020 21:46:35 GMT
1d2abf2
?
No.136667
136730
File (hide): 4DDDFAE298BB2575B0E596A8F359C7CE-238376.png (232.8 KB, 1080x810, resemble_orcs.png) 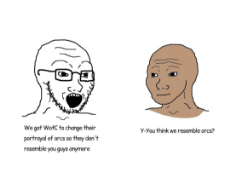 >>136664
>>136665
WotC has repeatedly made the point to define the flexibility to do anything and become anything as a uniquely human trait for decades now; Orcs being a specialized race has no implication for humans irl, so it's ridiculous to be offended by it.
Heck, the majority of human illustrations in 5e that aren't recycled from earlier editions, are black, ffs.

And now they're practically abolishing racial bonuses altogether in Tasha's Cauldron with the lineage system.
Although that was kind of necessary, because 5e has a major flaw in its balancing in that it punishes you for not choosing a race that increases your main stat by at least one, since it assumes that you'll succeed on whatever you're trying to do 60% of the time if you start with a 16 in your main stat. If you start with a 15 in your primary stat, you will have a bad time. Halfling Wizard? Hobgoblin Fighter? Kobold Sorcerer? High elf Cleric? Tough luck.
Anonymous
Thu, 22 Oct 2020 21:59:22 GMT
1d2abf2
?
No.136668
136672
>>136653
>The problem honestly, is Critical Role.
That's because WotC finds it easier and more profitable to base the game off of crossovers and youtube series than to actually contract real content creators that print books with actual content in them.
Anonymous
Thu, 22 Oct 2020 23:21:07 GMT
4791133
?
No.136672
136677 136679
>>136668
Well yes, because its far easier to mass produce as a series, hook people with, and sell more books by. In a business sense, it makes perfect sense (in that, utilizing Youtube and other current emerging technology) if one's intent is to sell more books.
However, this move by WotC will undoubtedly divide the DND fandom into two camps, consisting of old-schoolers who will not abide changes to Dragonslance other than the mechanical setup for 5e, and the fukking newbs, who WotC seems vastly more interested in marketing to.
Anonymous
Thu, 22 Oct 2020 23:21:55 GMT
4791133
?
No.136673
136678
In short, shit like this is why Pathfinder became a thing in the first place
Anonymous
Fri, 23 Oct 2020 00:03:35 GMT
1d2abf2
?
No.136677
>>136672
>will undoubtedly divide the DND fandom into two camps, consisting of old-schoolers
A lot of the old schoolers are already sick of WotC's garbage and moved to Paizo/PF.
PF2e is kicking off pretty well, or so I've heard.
Anonymous
Fri, 23 Oct 2020 00:07:29 GMT
1d2abf2
?
No.136678
>>136673
Yeah. A lot of the old fans and a considerable portion of the writers went to PF/Paizo in the years between 4e and 5e.
Paizo were the ones printing Dragon magazine while WotC was running out of steam, and for what DrMag content is worth, they were at the very least producing content and revising 3.5e class features while WotC was ready to drop the edition for 4e.
Anonymous
Fri, 23 Oct 2020 00:18:58 GMT
1d2abf2
?
No.136679
136682
>>136672
>the mechanical setup for 5e
If anything, it'll just be a couple spells, a handful of monsters (unless they just decide to stat Draconians as variant Dragonborn, which is a very real possibility), and one or two subraces that bear no resemblance to their previous-gen versions.
Mechanical writers for 5e are underpaid and scarce. Most 5e "content" is just purely-cosmetic garbage that instructs DMs to reskin existing races/classes or just homebrew the whole game themselves (that's what DMsGuild is for, afterall).
WotC doesn't even print lore anymore. They just throw out tiny sidebars of text and expect everyone to paste-together lore from previous editions. They also recycle a lot of their art from old books (which is arguably a good thing considering their new tendency to hire tumblr-tier artists recently), when they're not trying to randomly recolor notable NPCs as black.

WotC's entire business model for this past decade has been to milk the most they can out of the franchise in name alone, while putting in as little effort as possible in terms of hiring practices and content creation. It's insulting.
Anonymous
Fri, 23 Oct 2020 02:31:49 GMT
4791133
?
No.136682
136683
>>136679
>WotC
Well yeah, they're only a thing because of Magic: the Gathering. What did you expect? That they would refine their method over time? To produce better content?

DND experienced upheavals, and drama, and (gasp) storyline to accompany the overall conceptual engine and gaming dynamics.
Anonymous
Fri, 23 Oct 2020 08:32:42 GMT
a3c5674
?
No.136730
136731
>>136667
It's weird how much DND restricts racial choices.
back when I played 3.5e everyone was a Human 98% of the time for that practically-necessary bonus feat
The other 1% it was suboptimal picks for "Roleplaying" aka "Oh god I desperately want to be a beautiful elf woman or half-dragon woman more than I want to win or have fun or contribute to the party in this board game"
And the other 1% it was Warforged Robofags, a Superior Human Variant homebrew race, a Superior Elf homebrew race (christ if I had a dollar for all the homebrewed WoW Blood Elves/Night Elves I saw), Meme Dorfs who think hating "prissy" elves makes their random belches and drunken antics less obnoxious, or some blatant stupid comic relief character like "I am Ratrat the Kobold! Me want kill rats!".
Anonymous
Fri, 23 Oct 2020 10:36:31 GMT
1739115
?
No.136731
>>136730
Your DnD experience is irrelevant, and does not pertain to this topic which is focused specifically on the lawsuit and generally toward WotC as a shit company and how they've gradually degraded DnD. This is my thread, and off topic posts will be culled.
Also you're wrong, but that comes as no surprise
Anonymous
Sun, 25 Oct 2020 21:34:41 GMT
1d2abf2
?
No.136875
https://www.youtube.com/watch?v=a_MzZdltbbE
Anonymous
Sun, 25 Oct 2020 22:05:21 GMT
1d2abf2
?
No.136876
I think the saddest part about this is that we're probably never going to see any new Dragonlance books/content again as a result, no matter what the outcome of this lawsuit is.
[Last 50 Posts] [Last 100 Posts] [Last 200 Posts]
19 replies |  3 files |  4 UUIDs |  Page 2
[Go to top] [Return] [Catalog] [Reload] [Archive] [Update] ( Auto)