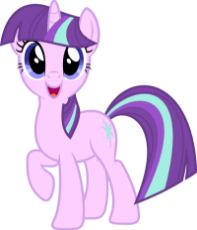 Her name is Starpunch Twinkle, and she hails from the far-off jungles of Southern Equestria, where the cool island breeze sways the coconut trees and the rhythms of the steel drums lull the ponies to sleep at night. She used to be not particularly good at friendship, but then magical things happened to her, and now she's gotten better. Still, she has a lot to learn. She hopes one day to become a famous tree surgeon, but sometimes gets overenthusiastic when she prunes tree branches and prunes too much. It's a habit that has been the source of many a wacky mishap.

Her cutie mark is a blue radioactive ninja star, which signified how she used to be a pretty good ninja but then decided to give that up in order to get better at friendship. 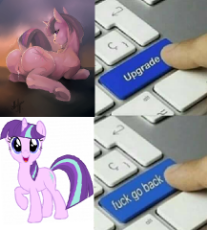 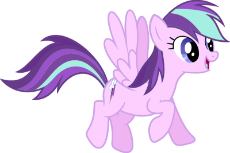 >>4668
Steal it? I should say not. She is a completely original character, just like my other character, Thunderdrop Quickrunner.

Thunderdrop was often made fun of as a filly because of the strange feathered protuberances growing out of her back. Then later she discovered they were called "wings" and she could use them to fly all over Equestria. Because of this she decided to work for the airlines, but eventually she was fired because she kept stealing packets of honey-roasted peanuts. 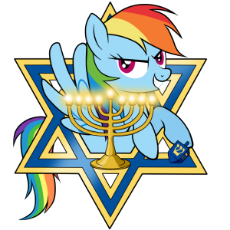 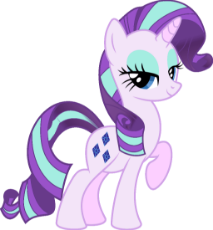 >>4671
I honestly don't know what you're talking about. I'm not Jewish; I'm Irish. I'm extremely Irish, actually. I will begin to melt almost immediately after stepping into the sun in fact, so I rarely go outside. It's one of the reasons I have so much time to work on my awesome pony OCs. I've never stolen anyone's identity before, although my father had his stolen once. Took him forever to get it back, and in the meantime this strange Albanian woman was living in our house because according to her he'd sold it to her. But I digress.

Anyway, I think you're really going to like my next OC. Brightstar Glowsprinkles is very fancy and regal, because she went to Miss Havisham's Finishing School for Gifted Fancy Ponies, where she learned to stand in that fancy regal pose you see her in. Unfortunately, there was a mishap with her financial aid at one point and she was forced to take a semester off. As luck would have it, that was the semester they covered all the other fancy poses, so she only knows how to do this one. However, it's gotten her pretty far in life, she was even able to qualify for a boat loan, although the boat was later stolen. 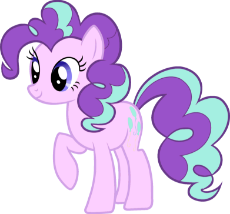 >>4673
Jewish potato nigger? Oh my, I'm not fond of those people; I had a terrible experience once. I remember once I was down in the potato patch, when one of them appeared out of nowhere and tried to sell me car insurance. Then later they stole my car. I think it may have had something to do with the methamphetamine trade as you mentioned now that I think about it, but I digress. I certainly hope you give that individual what for!

Anyway, my next OC is probably my favorite, and I hope she will be your favorite too. Her name is Puffbright Poofball, named for her great great aunt, Puffbright Chznyank IV, heir to the Duchy of Clovenhooves. She was born in a trash compactor because someone accidentally thought her mother was an expired ham and tossed her out, and when she awoke she was so startled that she went into labor just as the trash compactor was switching on. She dreams of being a dental hygienist, but will probably not be able to pass the prerequisite classes and may move back in with her boyfriend instead. Interesting bit of trivia: she can recite the entire text of the Canterbury Tales from memory, but only on Tuesdays or during the Winter Solstice.

Her cutie mark is three radioactive tadpoles, which she got because when she was little her friend told her she should catch a bunch of tadpoles and raise them in a pool, in hopes that she one day might become a frog botanist. She later abandoned this dream when she found out that there is no such thing as a frog botanist, but by then she had already gotten her cutie mark so it was too late. She kind of wanted a butterfly or maybe a cool skull with flames behind it or something, but she was drunk and wound up with the tadpoles instead.
Anonymous
Thu, 26 Oct 2017 10:09:37 GMT
No.4675
4788
File (hide): 1F0B96EC73504AECBC97150EC4EBF960-222922.png (217.7 KB, 1280x1665, sergeant_pinkie_pie_by_tensaioni-d3igmuj.png)
[Bing] [wait] [Tineye] [Yandex] 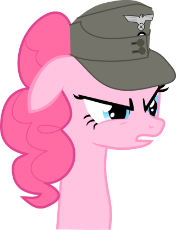 >>4674
Dammit some of them got away, well have to patrol the streets to find the last of the Juden.

These "things" are not even ponies. They are "OCs". They Copy ponies almost exactly. They Blend in and try to overthrow us real ponies. 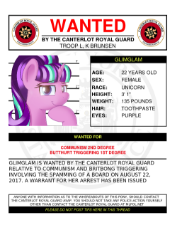 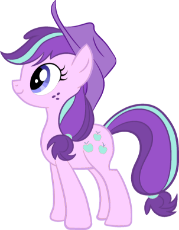 >>4675
I don't know who these "Juden" are, but they sound dangerous. I certainly hope you're able to catch them all! I'm also not sure who this "Applejack" you speak of is, but I would like to introduce you to my newest OC.

Hatticus Finch is a plucky farm girl who hails from Southern Equestria, just like her best friend, Starpunch Twinkle. When she was a filly she dreamed of being a famous opera singer, but was unable to qualify for the semi-finals due to judiciary prejudice against the ten gallon hat she always wore. So, she switched to a five gallon hat and decided to pursue her other childhood dream, which was to become a legendary cherry farmer and racecar driver. Fun Fact: she suffers from equine pattern baldness, so she always wears some kind of hat in order to cover her receding hairline. 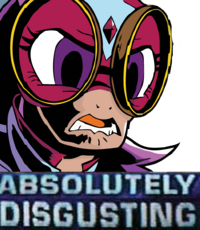 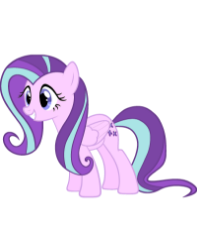 >>4792
My parents? I'm not sure. Last I heard they were living in Southern Idaho, where they moved in the late 1990s in order to escape the dreaded Manticore that had been plaguing Wisconsin for the past several years.

The dreaded Manticore was actually the inspiration for my other OC, who I like to call Skittles the Destroyer. She's a fairly feisty filly who hails from the Islands Beyond, where the climate is similar to Southern Equestria, except instead of the steel drums, the ponies instead fall asleep to the steadily beating Drums of Doom. Her dream is to spread friendship and eternal pestilence to Equestria and the Lands Beyond. 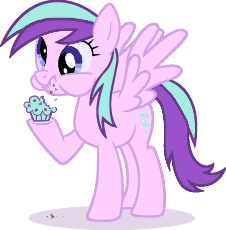 Cross-Eyed Linda didn't always used to be called Cross-Eyed Linda. She used to be called Cross-Eyed Deborah but had to change it when she discovered that that name was trademarked by Hasbro™ Inc. Don't let her cute harmless appearance fool you; she's a war pony from the Dark Islands capable of shooting nuclear powered laser beams out of her eyes, however they usually veer off in opposite directions and are quite harmless.

This is my last OC, it's probably my favorite tbh.

Her name is Rick Harrison, and she runs the pawn shop in Ponyville. She works there with her old mare, and her son, Big Horse. Everything in there has a story, and a price. 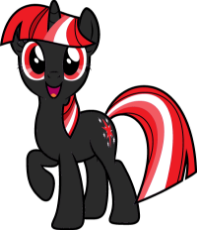 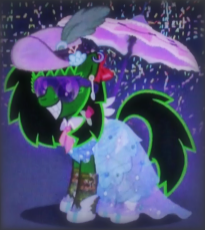 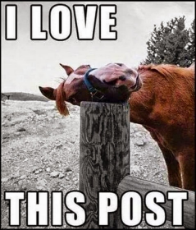