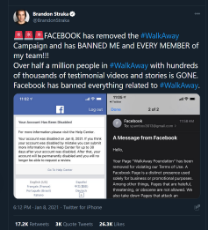 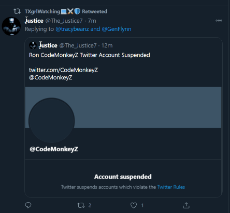 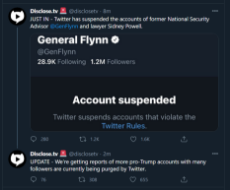 >ACEBOOK has removed the #WalkAway Campaign and has BANNED ME and EVERY MEMBER of my team!!!
>Over half a million people in #WalkAway with hundreds of thousands of testimonial videos and stories is GONE. Facebook has banned everything related to #WalkAway.
https://twitter.com/BrandonStraka/status/1347592064322719744 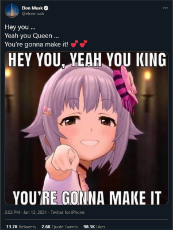 >Twitter and Facebook have seen $51 billion of combined market value wiped out since booting Trump from their platforms
https://archive.vn/rXyPH
https://markets.businessinsider.com/news/stocks/facebook-twitter-stock-price-trump-ban-capitol-riots-twtr-fb-2021-1-1029965338
Anonymous
Wed, 13 Jan 2021 23:13:01 GMT
117b1f0
?
No.298391
>>298332
ISPs will always be a thing. There is much decentralization that can be done (and should be done), but fully getting rid of companies providing connection can't be circumvented just like that. The moment I can't reach a different continent, but you can, and we come to the agreement that you share your connection with me for some moneys, you become the ISP. There is also the issue of development and maintenance of said data routes. Are you going to lay the intercontinental cables under the ocean yourself? Put your own satellites into orbit? If so, well done, but the rest of us will have to find some other way of converting our resources into internets.
I agree with the sentiment, but this is the same issue you run into with the anarchist hippies. You know, the "we don't need a government to have roads, maan, we just, like, need a guy who can build the roads, get him some money, and, like, someone to make sure he doesn't just take it and walk away... and maybe some guys who make sure people don't destroy the road or something".

I can see the possibility of smaller localized nets popping up as alternative communication between the locals tho. I think such project also should be done. But access to connections on the global scale will probably always have some sort of fee attached, whether it be from some company or nationalized ISPs.
>inb4 we're talking past each other
I am simply arguing from the understanding that at the end of the day, the ones who own the hardware have the final say about both the software and the data.
Anonymous
Wed, 13 Jan 2021 23:38:24 GMT
71d9bbd
?
No.298395
http://voxday.blogspot.com/2021/01/uatv-update.html
the Markku update is good
Anonymous
Thu, 14 Jan 2021 01:14:02 GMT
bcde0fe
?
No.298398
298407 298420 298462
>>297788
It doesn't matter who did it, they are very successful. So far.

>>297792
>I had no idea Amazon did web hosting
It's not just web hosting, it's hosting your entire app. It's saas, and parler fell for it. If you are serious, you have to host your own machines. At the very least, you should not use anything in these services that you can't replicate yourself. Parler tied their code to amazon, now they are fucked. Search for "vendor lock in." They fucking fell for it. Morons.

>>297911
>gamergate
I don't know, I looked into it, seems like a big nothing burger. Some slut fucked around and got some good reviews for a shitty game. Who doesn't know this bullshit happens all the time? Usually it's not sex, but dinners, gifts, etc. Sometimes hookers I bet. Maybe I'm just old, but I'm just not surprised.
Anonymous
Thu, 14 Jan 2021 04:26:42 GMT
6720d57
?
No.298407
298409
>>298398
>>The vast majority of boomers don't know about gamergate and I assume that if they did they'd just scoff at it.
>Who doesn't know this bullshit happens all the time? ... Maybe I'm just old, but I'm just not surprised.
Kek. In all seriousness though, that's been interpreted as a tipping point in dishonesty of the press and big tech. Cancel culture, censorship, sensationalism, everything. All the cucking of the media that's happening nowadays has been said to have started with videogames at least in large part as a direct result of GG. One or multiple people involved have gone on to speak at the UN about needing to have more inclusive representation in video games and demonizing opposition, getting gigs in industry afterwards and utterly wrecking the projects they take part in with propaganda. If you don't like it you're said to have too much privilege and need to be censored and removed from the community. Sound a bit familiar?
Anonymous
Thu, 14 Jan 2021 04:45:32 GMT
117b1f0
?
No.298409
298515
File (hide): E88A5CED3CA2947DBD36EED11830CFD7-298636.jpg (291.6 KB, 1216x937, ijwtpvg.jpg) 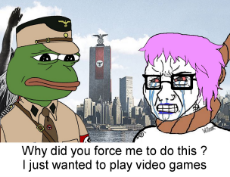 >>298407
This anon is correct.
Gamergate was a major battle in the culture wars. It probably wouldn't have much significance for boomers, but it exposed 2 generation's worth of people that came after to how marxist/jewish manipulation works. Boomers have Yuri, millenials and zoomers have Gamergate. It also happens that GG redpilled much more people than Bezmenov ever did. Turns out fucking with gamers backfires a lot harder than taking over Hollywood. I don't know if the reason for that is the nature of the medium or some underlying psychological difference between the generations, but it's true.
Anonymous
Thu, 14 Jan 2021 05:58:30 GMT
a0d8ca3
?
No.298420
>>298398
Slut fucked around, yes. However, that was just the fuse. The powder keg was when every last major gaming news outlet put out near-identical articles attacking their main customer base. The SJW side cried 'Muh wamminz', while the actual movement was about journalistic integrity.
Eventually, it crept out of the gaming world when links to other places and organizations started popping up when people were digging for info. Some folks got scared and shrunk back from being intimidated by the new, larger enemy. Others took a deep breath and saw the world with new eyes.
It launched or boosted the careers of quite a few anti-sjw talking heads,
Anonymous
Thu, 14 Jan 2021 20:00:09 GMT
ea91b13
?
No.298462
>>298398
It's a long story, but...
https://ggwiki.deepfreeze.it/index.php?title=Gamers_Are_Dead
Anonymous
Thu, 14 Jan 2021 20:14:53 GMT
7d96d7d
?
No.298465
298488 298513 298526 298540 298545 298561 298613 298653
I've been downloading YouTube channels with youtube-dl. Please give me suggestions on more channels to archive.
Already have a bunch including John Doyle, memology 101, and Trump's official channel.
The stuff I'm primarily looking for are right wing political philosophy, unbiased or alternative news, clips of events that damage the narrative (livestreams of riots, videos of leftist violence, etc), good commentary, things like that.

>inb4 people cry data mining or agent looking for stuff to delete
I think they have better ways of finding things to ban than asking in pony political forums. And anyways if you're worried about my intentions, archive them yourself first then reply here. I think it's more important for us to share good channels and stay connected as a community.
Anonymous
Thu, 14 Jan 2021 21:21:47 GMT
1b7670e
?
No.298479
Good breakdown of the Parler v Amazon lawsuit 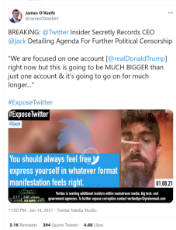 Not quite entirely political but should be saved due to edgy content/associations with to be banned creators:
Dovahhatty
E;R
Fringy
Gokanaru
History Bro
Internet Historian
Jarbo The Hutt
Kill All Pedos
Louis Rossmann
MauLer
Peridolin
Real Crusades History
RedLetterMedia
SAIGONpre1975
Shadiversity
The 4chan Cup
The Critical Drinker
The Symposium
TheAthelasProject (save his community posts about the recent Montenegrin Election)
Thomas Dean
TIK
Up To The Wolves
Z-FLO

I know not all of the people I listed are well liked (ehem Kraut and no braincells ehem Soycuck of Shitcad) but I just listed all the political channels I keep an eye on.
I probably missed some though so keep an eye out for those.
Make sure you get the smaller channels, some of them are especially good (The Distributist, The Franklin, Renaissance Man, etc.)
Anonymous
Fri, 15 Jan 2021 09:22:44 GMT
89abc26
?
No.298515
298516 298538
>>298409
The irony of fucking with gamers always surprises me. Because most of them would have been fine with the pod and the bugs as long as there are games to keep their mind off that.

>>298513
>Varying levels of political youtubers:
I'd add to those Argent and Serp Kerp. They're comparative nobodies but they make worthwhile if autistic content. Jreg is apolitical (probably a leftist) but has decent political content.
Monsieur Z is /ourguy/ for sure and makes history videos. Dovahhatty is good as well (check out Judea Delando Est, kek. PhilosophiCat has an entire series on Evola. Edward Dutton has been targeted in the past and he has great stuff. A Dormant Dynasty (formerly Asian Capitalists) is underrated. Truediltom is back (though many of his old videos are still off YT) as Neuroposter.
Also keep in mind some of those are the same guy with different channels, like Knight's Move and Alternative Hypothesis or Sargon's different channels.

Not quite entirely political but should be saved due to edgy content/associations with to be banned creators:
I'd add Max0r and Rimmy. JonTron is another one as although his content is apolitical he got in trouble for putting out a good word about white nationalism and still knows Sargon, Shadiversity and now Academic Agent. 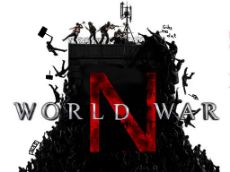 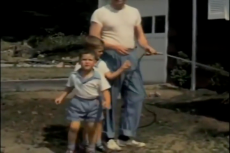 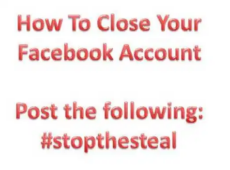 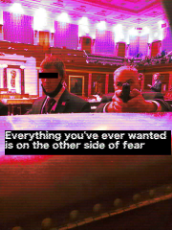 >>298829
if the country managed to elect me in place of trump we probably wouldn't have made it out of inaguration without a severe civil war.
you can very easily name the jew, just name them, rely on your patriots. call them to arms to defend the country, instruct those that cannot fight offensively to fight defensively through non compliance. no paying taxes, non compliance with the law. Do you think anyone in washington with a spine is going to update their car tabs after they overruled democracy here with a kangaroo court that said initiatives are unconstitutional in washington because the government knows better than you? (unironically this is the ruling)

You tell the people to take action, Trump has a masterful situation here, and he could have done something with it, arguably still might, and it would even be more effective than anything I could do. But even I could do a lot if I was sitting in that meme position, because its not the position that matters, its the network, the ability to get people to act, to reach millions.
94 replies and 43 files omitted.
[View All] [Last 100 Posts] [Last 200 Posts]