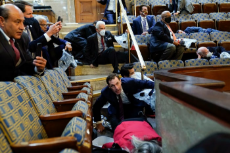 Anonymous
Fri, 08 Jan 2021 18:09:22 GMT
9bfa36e
?
No.297245
297247 297284
[Last 50 Posts] [Last 100 Posts] [Last 200 Posts]
2020
>a Confederate monument falls on top a nigger's head, wounding him after attempting to destroy it
>a user going under the name "SoL" used social engineering and public wifi to dox tens of thousands of Portland antifa which was followed up by several other anons who participated, doxing Antifs in Asheville, NC also. This soon resulted in unrelenting attacks against websites that were disseminating this information, leading to it being Torrented in response.
>Coalfax is born
>first purported lynching in only God knows how long (Ahmaud Arbery) and an attempted lynching (Vauhxx Booker)
>George Floyd riots start after a purported Aryan Cowboys member starts smashing windows at an auto zone to incite a riot. It soon engulfs the rest of the country and world.
>a video is uploaded to World Star Hip-Hop of a white man paralyzing a black man after calling him a nigger
>largest right-wing rally since Shelbyville happens in the nation's capitol (Patriot Front)
>Richard Spencer declares the alt-right over in August 2020 when he voiced his support for Joe Biden following Trump's strike on Iran that killed Soleimani
>Britain finally leaves the EU
>Tobias Rathjen shoots and kills 10 in Hanau, Germany, wounding 5 more.
>Trump loses the 2020 elections to Biden in November
>Mississippi officially redesigns it's state flag after becoming the first black majority state in the US
>COVID-19
>countless more protests over various other dead niggers that nobody but bleeding heart liberals seem to care about
>2 dead, 1 wounded in Kenosha shooting by some 17-year-old Blue Lives Matter mutt; antifa still seething about it to this day

God, I love how this decade is starting already. This is going to be fun.