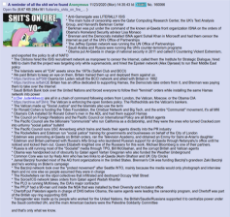 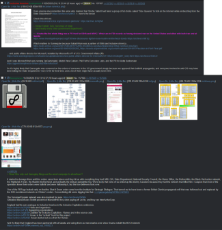 > A new faction, Islamists, have taken over the Capitalist Meta-Infrastructure that Socially Engineered The West.

This is really important right now because:

Biden has appointed a terrorist supporter as deputy director of the Office of Legislative Affairs.
http://elderofziyon.blogspot.com/2020/11/new-biden-deputy-director-reema-dodin.html

>>292557
>You know what would be a great place for long-term storage of images like this?
>wanting to centralize information
>not learning from the 8chan takedown, 4chan tranny takeover, derpibooru destruction
The best place to store information is something you own.
Relying on someone else to defend critical aspects of culture breeds complacency, which has been shown to be the biggest threat to everything.
Use MozArchiver, or take full screenshots of webpages.
Save images and videos.

Biden is taking several of his cabinet picks from a group called WestExec.
https://gnews.org/596585/
One of them, Lisa Monaco, is part of the Homeland Security Experts Group which is co-chaired by Michael Chertoff who gave away control of the Department of Homeland Security to agents of Pakistani ambassador Akbar Ahmed.
https://homelandsecurityexperts.org/our-experts/ https://archive.is/ojrml
http://www.globalmbwatch.com/2008/05/04/analysis-dhs-memo-supports-muslim-brotherhood-influence-counter-terrorism-language/ https://archive.is/ZHPBj

Lisa Monaco and Alejandro Mayorkas helped Pakistani national Farah Pandith and the Muslim Public Affairs Council establish a "Countering Violent Extremism" program at the Berkman Center of Harvard University in coordination with the Institute for Strategic Dialogue whose members are the recruitment network for the Islamic State in Iraq and Syria (ISIS) and the Golden Chain network of al-Qaeda. In effect, Monaco and Mayorkas were recruiting a generation of college students into al-Qaeda.
https://www.whitehouse.gov/the-press-office/2014/04/16/remarks-assistant-president-homeland-security-and-counterterrorism-lisa- https://archive.is/Ing3A
https://cyber.law.harvard.edu/node/95705 https://archive.is/wuFU3
https://files.catbox.moe/t2no96.pdf
Anonymous
Wed, 02 Dec 2020 02:09:35 GMT
32fcfb5
?
No.293203
More from: https://lidblog.com/joe-biden-anti-israel-team/

* Reema Dodin justified the 9/11 attacks as a reaction to U.S. support of Israel

* Avril Haines, Biden's appointee for Director of National Intelligence, signed on to a J Street letter denouncing the DNC for failing to support the PLO

The UN Alliance of Civilizations was proposed by Iran and organized by Pakistan through the UN.
https://archive.is/DFPDy https://www.forbes.com/2009/03/25/alliance-of-civilizations-opinions-columnists-obama-un.html

https://archive.is/8ahQE Avaaz first got into the news by astroturfing for Hamas. Then they were PR for the overthrow of Syria.
Anonymous
Wed, 09 Dec 2020 13:52:32 GMT
32fcfb5
?
No.293924
Biden picks retired general Lloyd Austin to run Pentagon
https://www.msn.com/en-us/news/politics/biden-picks-retired-general-lloyd-austin-to-run-pentagon/ar-BB1bIkkT

Lloyd Austin was part of the Carnegie Corporation and is guaranteed guilty of Misprision of Treason due to the activities of the other board members
https://archive.is/V7uy4

Beutner is treasurer of the Pacific Council on International Policy which gave a charter membership to al-Qaeda supporter Maher Hathout.
https://www.sourcewatch.org/index.php/Maher_Hathout
https://www.investigativeproject.org/profile/109/maher-hathout

Hillary Clinton endorsed a UN resolution by the Organization of Islamic Conference to outlaw opposition to Islam worldwide.
https://counterjihad.com/ongoing-affront-freedom-un-resolution-1618-assault-free-speech/

The Organization of Islamic Conference had a coordinated propaganda effort with a rapid reaction team of 7,000 journalists, advised by Russia and hosted at the UN.
https://ggwiki.deepfreeze.it/index.php?title=UN_Alliance_of_Civilizations

Obama and the Weather Underground were both recruited by Vartan Gregorian who was part of that OIC team.
https://www.wnd.com/2010/06/171429/

The Weather Underground's race-war teachings about "whiteness" and "white privilege" were pushed on schools by the Common Core program which is connected to Qatar and to Hady Amr who has links to Al-Qaeda.
https://www.crossroad.to/articles2/0013/excerpts/8-common-core-qatar-wahhabi.htm
https://ggwiki.deepfreeze.it/index.php?title=Al-Qaeda#Common_Core

Soros sided with the Muslim Brotherhood when the feds caught al-Shabaab recruiting in Minneapolis. Obama followed Soros's orders and began a "Countering Violent Extremism" program targeting "White Supremacy" which he allowed to be defined by the Muslims as any opposition to terrorist orgs.
https://archive.is/QwB5o

Obama put members of Hamas on the National Security Council. When Trump came in and replaced them, the Pentagon fired Trump's people and put them back.
https://turningpointproject.com/ali-in-wonderland/

The UN made partnerships with the Epstein ring which called itself TerraMar (and also the Humpty Dumpty Institute). They were friends of the Clintons and gave a job to Clinton's daughter while Maxwell's nephew was allowed to run the State Department's Middle East policy.
https://archive.is/SWldv
https://www.thedailybeast.com/revealed-bill-clintons-intimate-secret-dinner-with-ghislaine-maxwell
https://www.breitbart.com/politics/2020/01/06/chelsea-clinton-rakes-in-9-million-as-corporate-board-director/
https://nationalfile.com/two-ghislaine-maxwell-nephews-worked-for-obama-biden-and-clinton/

The Maxwells are part of the PROMIS ring that killed Danny Casolaro
http://themillenniumreport.com/2019/10/the-octopus-inslaw-promis-software-scandal-and-those-killed-by-its-tentacles/

Chertoff let Pakistan put a spy ring inside DHS so they have been running the whole department since before Obama was elected.
https://www.globalmbwatch.com/2008/05/04/analysis-dhs-memo-supports-muslim-brotherhood-influence-counter-terrorism-language/

Pakistan had a spy ring inside Congress to watch their comms and ensure that they had no idea what was going on.
https://www.americanthinker.com/articles/2018/10/the_democrats_it_scandal.html

The OIC works through a spy ring called Avaaz (also: Purpose, SumOfUs) that is a PR front for Hamas. Avaaz runs MoveOn and SEIU and is sponsored by George Soros.
https://archive.is/8ahQE

TerraMar's Global Partnerships Forum is partnered with Purpose which is Avaaz.
https://archive.is/sCiWa 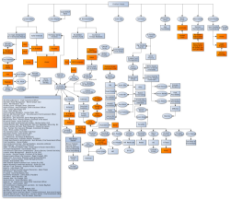 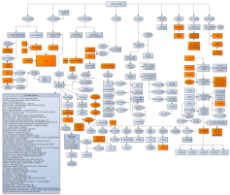 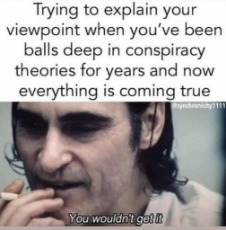 https://www.zerohedge.com/geopolitical/chinas-unrestricted-war-united-states
>In 1999 Colonel Qiao Liang and Colonel Wang Xiangsui wrote a book called Unrestricted Warfare.
>This and other examples caused these officers to postulate another type of warfare they called unrestricted warfare, which crossed all of the spectrums of society and involved no rules

> Thomas Zimmerman, who will serve as a Special Assistant to the President for Presidential Personnel under Joe Biden, formerly served as a visiting scholar at what the FBI has called a “front group for Chinese intelligence collection and overseas spy recruitment,” The National Pulse can reveal.

> While at New York University’s Center on International Cooperation, Zimmerman also served as a fellow at the Shanghai Academy of Social Sciences, flagged by the Federal Bureau of Investigation (FBI) for its close ties to the Chinese Communist Party’s top spy agency, the Ministry of State Security.

> Colin Kahl, whom Biden tapped for undersecretary of defense for policy, has served as a senior fellow at the Freeman Spogli Institute for International Studies at Stanford University since the beginning of 2018. The institute oversees the Stanford Center at Peking University in northern Beijing, which opened in 2012.

> Peking University, which is run by former Beijing spy chief Qiu Shuiping and has been linked to multiple espionage cases in the United States, recently updated its charter to require loyalty to the Chinese Communist Party, according to an NPR report.

> Bill Burns – Joe Biden’s pick to lead the Central Intelligence Agency – serves as the President of the Carnegie Endowment for International Peace which has over a decade-long relationship with the China-United States Exchange Foundation and other Chinese Communist Party-linked groups.

The Carnegie Endowment also includes former Jordanian official Marwan Muasher
> The Blaze also indicates that Soros' connections to the Muslim Brotherhood can also be traced through his relationship to his new spokesman Marwan Muasher, as well as Mohamed ElBaradei, Muslim Brotherhood leader who sits on the board of Soros¿ ICG.
https://www.thenewamerican.com/usnews/crime/item/7494-george-soros-allies-with-the-muslim-brotherhood

Muasher is the author of "Political Islamism is not to be feared"
https://www.washingtonpost.com/opinions/political-islamism-is-not-to-be-feared/2012/05/25/gJQAgR2hqU_story.html
Anonymous
Sun, 24 Jan 2021 01:27:02 GMT
32fcfb5
?
No.299532
Robert Malley being considered for special envoy on Iran
https://jewishinsider.com/2021/01/daily-kickoff-rob-malley-being-considered-for-special-envoy-on-iran-what-blinken-and-mayorkas-told-the-senate-yesterday/

After Israeli-Palestinian peace talks collapsed at the end of the Clinton administration, Malley, who engaged in those talks, publicly dissented from Clinton’s own view that the talks failed because of the late Palestinian leader Yasser Arafat’s failure to make a counter-offer. In 2008, he stopped advising the Obama presidential campaign on foreign policy after reports emerged that he had met with leaders of Hamas, an organization the U.S. and Israel consider to be terrorists.
https://theprint.in/opinion/us-president-joe-bidens-first-foreign-policy-blunder-could-be-on-iran/590074/