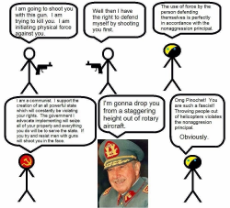 He brought down corruption till it was almost non-existent, he fixed the economy dramatically, and, most important of all, he killed commies!

Many dictators are accused of being nothing more than power hungry, blood thirsty psychopaths, who care little about their country and just wanted to stay in power. This is absolutely the case for many latin American dictators from around the same time as Pinochet. But was it the case for Pinochet? NO! Absolutely not! Pinochet cared greatly about the state of Chile! Everything he did was for the betterment of Chile, and it worked! Chile went from a decaying socialist shithole to the BEST country in South America! Ironically I'd say the only fuck up he did was voluntarily stepping down as dictator after the majority ruled in favor of him stepping down.

Many countries that went through a dictatorship generally have a mindset that the dictatorship was horrible and that they should never go back to that. Chile is different! Despite the fact that the majority voted for him to step down, it wasn't even by that much! 44% of the country liked him and wanted him to stay! Now why is this? Why would 44% of a country want a dictator to rule over them? Because they were happy! Because it was a good government! Even today, more than 20 years after the dictatorship, a very sizable part of Chile STILL worships Pinochet!

>But what about the people he killed???
First of all, they were not "people" they were commies, their lives don't matter. Second of all, almost all the commies captured weren't actually killed! They were either sentenced to jail or sent to the military! The only commies Pinochet killed were the super fanatic commies who often engaged in armed terrorist attack with bombs and firearms and wanted to establish something similar to Cuba or Venezuela (two GARBAGE countries) in Chile. And even then, his kill count was around 3 thousand... That is laughably low compared to some of the truly god awful dictators like Castro or Stalin.

Anonymous
Tue, 28 Apr 2020 00:11:35 GMT
a859788
?
No.266929
266931 267034
>>266924
>Because his regime was SUCCESSFUL!
That depends, it was success for the oligarchs and the CIA handlers, and an absolute defeat for the commies.
By the way, the forgotten Chilean citizens starved with the commies and the capitalist, no matter who is in charge, the common Joe always is screwed.
Anonymous
Tue, 28 Apr 2020 00:17:08 GMT
f915897
?
No.266931
>>266929
>the forgotten Chilean citizens starved with the commies
That's because of the chaos that was Chile under Allende was not something that could be fixed overnight. Chile under Pinochet had WAY less poor people starving on the streets. And you know, it doesn't matter how good a country is, there's always going to be poverty.
Anonymous
Tue, 28 Apr 2020 01:07:56 GMT
c8bd6ae
?
No.266934
>>266924
>Many countries that went through a dictatorship generally have a mindset that the dictatorship was horrible and that they should never go back to that.
I agree, when the enforcers point guns at the people, the resentment can grow to become pure hate.
>Chile is different!
I doubt it, I don't believe the propaganda. Some portion of the population got benefits from the regime change and the rest (the lower class) didn't after many years down the road. When Pinochet stepped down the liberals took over with all their degenerate lefty baggage, this is precisely why Pinochet is loved for some, Pinochet meant stability while democracy is a roller coaster.
In the end, Pinochet's coup d'état was about to restore the control of the local oligarchs, as usually happens in South America. Take in count, if American agents were involved in the coup by grooming the Chilean military, then a powerful economic reason existed behind the curtains.
Anonymous
Wed, 29 Apr 2020 12:17:25 GMT
0ddafca
?
No.267034
File (hide): 604CB8254BEC527A3AD8F6F204CF4D98-63346.jpg (61.9 KB, 750x744, 1588162262.jpg) 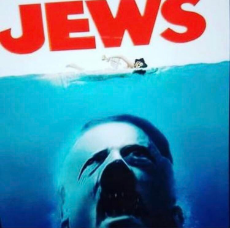 Reading the history of the 20th Century leaves any sane person with no doubt that democracy is fragile and a nation could do far worse than a Pinochet. I'm sure millions of dead Cambodians would tell you they'd have preferred Pinochet to Pol Pot. If only Cambodia had had a Pinochet of its own, to overthrow Pol Pot and throw him and all his Khmer Rouge terrorists out of helicopters into the Gulf of Thailand.

All over Latin America, the Communists saw the success of Communist terrorism in Southeast Asia and attempted to overthrow pro-Western governments--in all instances with weapons and training provided by Cuba and the USSR. In some nations, like Argentina and El Salvador, they were beaten back. In Nicaragua they were not, causing a bloodbath and a decade-long civil war. If only they'd had a Pinochet of their own.
Anonymous
Sun, 03 May 2020 06:46:00 GMT
e9fe8da
?
No.267459
267461 267582
>>267456
>Pinochet is one of the 20th Century's great heroes.
Let me pull the wool over your eyes about the dynamic of regime change.
According to the narrative Pinochet by himself defeated the commies just because they were evil. Reality is a bit more complicated.
As I know there was a disagreement with foreign companies about the Chilean cooper and the commie president Allende wanted a bigger piece of action for Chile's treasury. So as usual the intrigue begun and the plot for the coup was green lighted.
Pinochet just was the tool to restore the local patrician families to the helm (the traditional administrators) and little has to do with capitalism vs communism.
You have to understand that for the international financiers what matters is to extract resources, and under what political regime those resources are, is irrelevant.
Anonymous
Sun, 03 May 2020 06:53:55 GMT
6126738
?
No.267461
267576
>>267459
>cooper
*copper
Anonymous
Mon, 04 May 2020 09:22:03 GMT
e4b7e9f
?
No.267576
>>267461
Reds are enemies of mankind. Allegiance to Marxism is treason to the human race.
Anonymous
Mon, 04 May 2020 10:04:17 GMT
22363bc
?
No.267582
>>267459
I don't know why this is supposed to be some big revelation, considering that mainstream and lefty sources push this talking point. When the CIA coups a country they usually can't control it directly but they rather appoint someone who is aligned with their interests and in a position to take control. Usually this is pretty terrible like in Iran, Iraq, and Afghanistan, but Chile managed to get lucky as Pinochet was not incompetent, despotic, or corrupt. While this is the exception for regime changes it's not impossible, just as blowing random things up may conceivably improve rather than ruin the surrounding area once in a while. In any case the restoration of the "local patrician families" was an objectively superior outcome to falling under communist tyranny.
[Last 50 Posts] [Last 100 Posts] [Last 200 Posts]
9 replies |  2 files |  10 UUIDs |  Page 7
[Go to top] [Return] [Catalog] [Reload] [Archive] [Update] ( Auto)