I posit that modern society is misguided and forced to buy into a system which enslaves them. Building codes have become bureaucratic checklists which don't necessarily fit every unique scenario. We are forced to live in standardized boxes with no creativity or ingenuity and no personal connection with the materials. To remedy this, we should take the initiative to learn how to build a house ourselves, while exploring alternative and historically sound building methods.

One approach to cutting the cost of housing is the tiny house movement. I started out researching how much it would cost to build. It varies greatly based on how much space you actually want inside and what type of construction you are planning. Additionally, I've seen people save drastic amounts of money by finding windows, doors, scrap wood, and other materials for free on craigslist and from people throwing them away.

The three main types of tiny houses I've been interested in so far are traditional stick frame on a foundation, stick frame trailers, post frame (pole barn style), and yurts. Stick frame and trailer tiny houses have the advantage of being familiar construction methods if you have to hire contractors. They require a lot of wood cost and a lot of modern materials cost such as exterior siding, roofing materials, insulation, waterproofing, and moisture management. These seem to cost around $40,000, more or less depending on if you have to hire contractors for plumbing and electric or if you can do it yourself and get it inspected. If you're creative with sourcing materials for free or cheap, then this might be a good choice, as long as you can live with the extremely small floorplans. Might be hard if you have a family, The biggest advantage of this type of construction is that it seems much easier to get building permits since the building method is so close to traditional stick frame. However, in many jurisdictions in the US, you aren't allowed to build a house under a certain square footage and would have to fight to get a permit through.

Post frame buildings are similar to pole barns; they use large wooden posts dug 4-5' into the ground with a skirting of concrete around each post as a foundation. When done right, it's very resilient against bad weather, especially since the roof can be bolted into the thick posts directly instead of fastened to the tops of stick frame walls. With this method, you put in posts about every 8' and use wood screws to tie boards from post to post. This makes it a lot simpler to frame up exterior and interior walls, since you can do it one board at a time horizontally rather than having to build the whole wall as one piece and raise it up later. The roofing ends up being about equivalent to stick frame houses, depending on if you use rafters or trusses. You can weigh the options between the two based on what kind of attic you want and how strong the roof needs to be against rain and snow. This building method has the advantage of being MUCH easier to build by yourself or with fewer people. It also allows for much larger wall cavities for more insulation and easier wiring. I don't know if post frame buildings are accepted generally or not; they likely would take a special permit and a design plan which is signed by a civil engineer. This is the construction method which I was designing for before covid jacked the wood prices to oblivion.

Yurts are weird. They are way cheaper to get a starter home down, which is appealing to quit paying mortgages or rent, but they have a lot of problems with insulation and with how flimsy the walls are. Racoons can get in for example.

I can post a lot more about each of these construction methods if anyone has questions.

In the following posts I'll introduce the alternative building methods which interest me now. 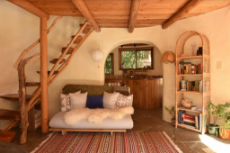 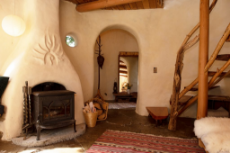 >'member houses have different purposes and lifetimes. Different costs too in just about every aspect. Also different considerations.
yes!

To continue where I left off, the most recent building methods I've researched are natural building methods using some form of dirt. Specifically sand, clay, and straw mixed together to form adobe bricks or cob. The ratios vary and aren't as important compared to testing it out and getting a feel for the materials yourself, from what I've read. The concept behind this is that the clay is the thick binder that wants to stay in place, the sand allows the mixture to be a little looser to mix fully together and not brittle and crumbly, and the straw acts as a mesh holding the entire wall or brick together as one. With adobe, you make many large bricks, baking them in the sun before stacking with them to form walls. Cob is different; you make batches of cob and pile it up, mushing new layers into the old layers. After periodical drying and stacking phases, you get thick walls made entirely from this material. On the inside you'll have to figure out the wiring and plumbing, perhaps by either framing the interior with wood or by digging out portions along the walls for conduits to run through. With cob, you could easily design the contours as you're building, by just stacking around the area you want open.

The other earth building method I've seen uses rammed dirt or uses "earthbags". I don't know much about rammed dirt methods. Earthbags are interesting because you don't even have to mix material like with cob. However, the bags can break down, causing the structure to not be held together as well.

I've been focusing on cob the most out of these three. What interests me particularly is how it gives the ability to shape your home as freely as you can imagine it to be. You can make rooms feel like small caves, or make large rounded spaces. You could build everything square, or you could create interesting door shapes and curved kitchen counters. You can even use any glass as a window in any shape. (whole other topic though if you want to talk about glass types and what parts of the spectrum they block).

One issue with cob and adobe, however, is that it conducts heat really well. Know how a tile floor feels so cold in the morning? It's like that, releasing all its heat through whichever side of it is coldest. With thick cob walls, you at least get to "charge up" the walls as a heat battery. If it's cold outside, then the heat will leak out a lot over time. In the short term, if you have a wood stove inside, then you can charge up the walls with the stove heat, which will release heat back into the living space over the rest of the night (since the temperature difference is high enough that it's easier to leak out the inside wall rather than travel to the exterior walls to escape). It's important to consider the thermal design when you build with cob.

There is an interesting way to insulate a cob house with natural materials, and it itself is a building method called "straw bale" houses. The erection of a straw bale house is much easier than cob or adobe; all you do is get square bales of straw (not hay), stacking them like bricks to form the walls. Then, you cover the inside and outside walls with several inches of cob. The straw bales provide comparable insulation to modern insulation if you use them right (stacking them thick vs tall).

An advantage of straw bale buildings is that the roof can be fastened down through ties fed through different layers of bales. Thus, to blow off the roof without shredding the fasteners, a storm would have to lift literal tons of material.

One aspect I'm more wary of is that a straw bale would have the chance to decay internally over a long period of time. Apparently if it's straight cob, then the straw will be preserved pretty well. I don't know how fast straw bales covered with cob would degrade. 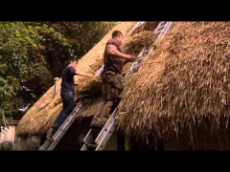 >>1358
> One aspect I'm more wary of is that a straw bale would have the chance to decay internally over a long period of time.
For comparison: well-laid thatch does decay slowly, but it's mostly not removed, rather new thatch is laid on top. In old buildings you can get centuries-old straw from the attic.

Don't know how that's gonna work for the inside of a wall though.
Anonymous
Tue, 14 Sep 2021 14:47:16 GMT
No.1381
I love these old fashioned houses but how easily could an intruder get in?
Anonymous
Tue, 14 Sep 2021 16:11:46 GMT
No.1382
1383
you guys are being rather silly. modern castle building materials is called ICF- Insulated Concrete Form. its rather thick Styrofoam hollowed out so you can put rebar steel in the middle and pour in concrete. good for stopping tornados and any stray .50BMG that might happen to find the side of the house. ultra-low maintenance, lasts forever, and very thermally insulated. 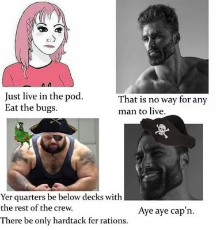 >>1350
On one hand, tiny houses are a nice regulatory loophole. On the other hand, I don't want to live in a pod. 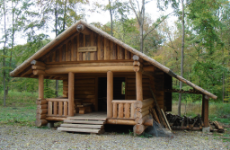 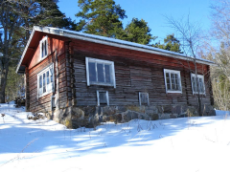